Yesterday I was very curious to see what kind of congratulatory message I'd see on my new FitBit Versa 3. After all, it was an upgrade on the previous Fitbit, so I'd get something different in any case. But the thing had a larger colour screen, and so there was tremendous scope for a richer experience!

Well, I set the Versa 3 up to make sure that (a) I definitely wouId get a congratulatory message, as I'd disabled all external notifications; and that (b) I'd feel a strong vibration on my wrist when the message started to come through, so that I'd have time to get a photo of what was showing.

You got these congratulatory messages whenever you achieved your main daily goal. In my case it was always the default goal of walking 10,000 steps. The FitBit would come alive, vibrating on my wrist and then show (for instance) an animated display of exploding fireworks, a revolving glitter ball, or a passing rocket, depending on which FitBit it was, and which year, for there was usually a fresh set of 'well done!' messages whenever the firmware was upgraded.

In the past my FitBits had had monochrome displays. The tiny screens made the most of it, and I was always excited about both reaching my daily 10,000 step goal and seeing the animated message. But now, with colour added, and more screen space, I felt certain that I'd be in for a treat.

Usually I can walk 6,000 steps each day at home without special effort, so that any kind of walk around the village - or elsewhere, if I fancy a change of scene - will top that up to 10,000 steps or more, triggering a congratulatory message on my FitBit screen. But it had been another dull and wet day, bucking up only in late afternoon, and my step total was only 3,000 or so.

Well, after cooking and eating my evening meal, I went off to Lewes for a mid-evening town walk. But it wasn't enough. I got home at 9.00pm with only 8,000 steps achieved. So I went out again. It was almost the summer solstice, and so the sun hadn't quite gone down. There was ample light left for a late-evening village walk. I had only 1,800 steps to cover as I shut my front door. The little Leica was all set up in macro mode (for a good close-up of the Versa 3's screen as the show began) and ready in my hand. I had only to switch it on, let it snap into focus, and press the shutter button.

Those 1,800 steps took longer than I thought, and the light was fading somewhat, when I felt the FitBit vibrate on my wrist. I switched on the camera, and aimed it at the screen. But it had to hunt for good focus in the poorish light, and meanwhile missed the opening of the display. I saw an array of coloured blobs dancing around on the screen, forming themselves into a revolving ring. The Leica was finally ready to take a snap of that ring. 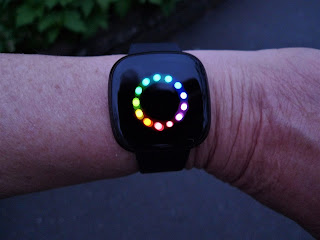 Tsk. Not as good a shot as I was hoping for. If only the light had been better, and focusing easier. Maybe the macro setting - which required critical focusing - had been a mistake! But the camera had plenty of time to capture the congratulatory message itself, which followed the revolving blobs of colour. 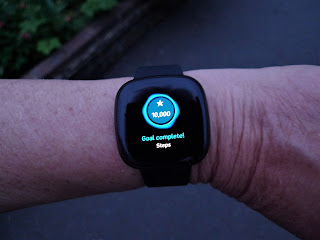 That looks like a solar eclipse to me!
I got home with 11,000 steps under my belt - a good start to my experience with the Versa 3.
Next time, I could perhaps attempt a movie with my phone? But I'd have to operate the phone one-handed. That's never easy - and the main reason why, if I only have one hand free, I always use the Leica.
Posted by Lucy Melford at 21:43