A lot on my plate

At the end of my last post I showed a picture of an overloaded dinner plate. I said that I'd remedied this.

Back in 2015 I was still caravanning with the big white bone china plates I used at home. These were a generous 11.5 inches across. They were excellent for any meal that wasn't a mere snack (for which I used - and still use - small light-green plastic plates of ancient lineage, going back to 2002). Any kind of meal looked good on these big white plates. For instance: 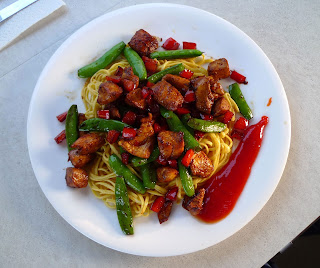 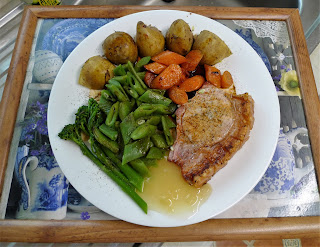 But then I broke one when washing up. My elbow accidentally nudged the drying rack and sent it crashing into the stainless steel sink. (I soon replaced that rack for something larger and impossible to upset) 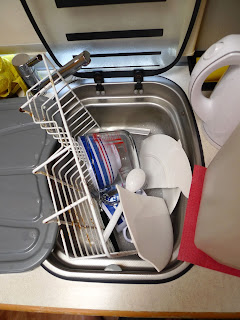 Oh dear. My set of six fine bone-china Denby plates was now reduced to only five. They were expensive plates, and clearly I couldn't risk breaking any more. Plastic plates were the answer, specifically melamine plates. Melamine is the standard material for picnic, camping and caravanning crockery because it's tough but lightweight. It resists heat, scratching, cracking and chipping. So an article made of melamine is largely accident-proof, but no weight to carry around. The striped melamine cereal bowl and mug in the shot above emerged from the crash completely unscathed.
I immediately looked around for some melamine dinner plates. I soon found what I wanted, purchasing four blue plates with yellow-and-white flowers on them at a hardware store in Newton Stewart, a town in Galloway in south west Scotland. This was one of them. Although it wasn't ideal, I was content with the design and the colours - at least these plates looked sunny and cheerful! 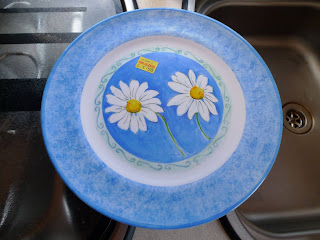 If I had any real reservation, it was with the size of the plate. It was only 10 inches across. Less space for my food. Let's do some easy maths. As every schoolboy or schoolgirl knows, the area inside a circle is found using the formula πr², where r is the radius, which for a round plate 10 inches wide is 5 inches. Thus the area of my new blue plates was π x 5 x 5 = 78.6 square inches. Compared to π x 5.75 x 5.75 = 103.9 square inches for the big white plates. So the new blue melamine plates were only three-quarters the size of the white plates.
Predictably, it was trickier to arrange my food on these smaller plates, and it might easily fall off. I had to be especially careful when pouring on gravy. Here are some examples of how inelegant my caravan meals could look when squeezed onto a small plate. 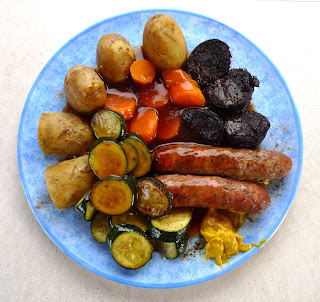 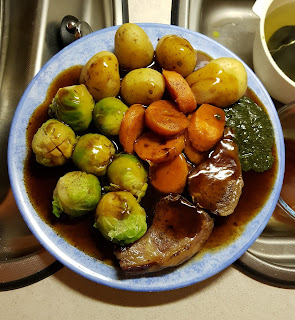 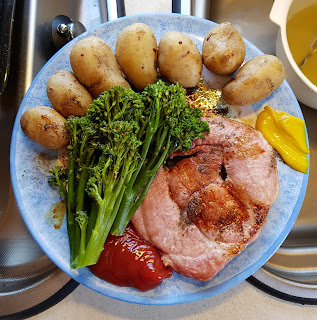 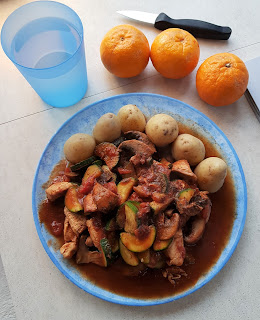 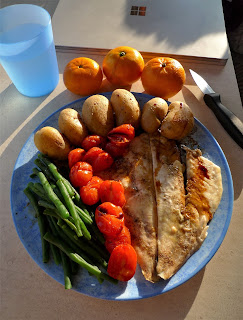 The new plates worked rather better with breakfasts and light lunches. 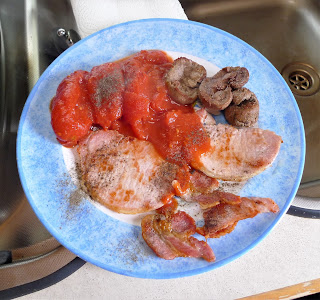 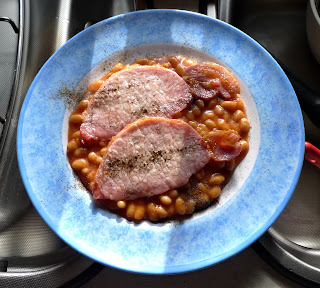 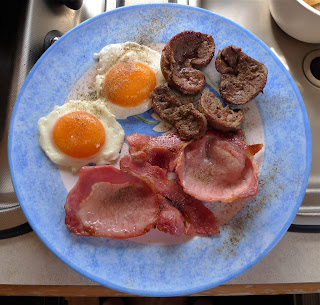 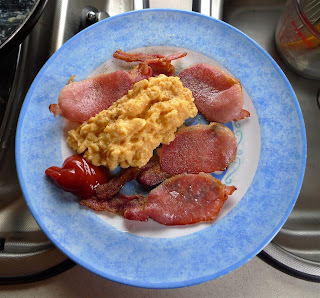 Well, I put up with often-overloaded plates for six years. It was, after all, a problem only in the caravan. At home I could use those nice big white Denby plates.
You might of course ask me why I didn't just eat less when caravanning. Wasn't it better to use the holiday as an opportunity to eat less, exercise more, and generally get slimmed down and toned up? To which I would say, hey, I was walking 10,000 steps most days, regularly heaving heavy water containers, and on the whole doing a whole lot more physical stuff than I ever did at home. I'd get very hungry! So there was no way I was going to curb my appetite, which is always sharp.
I dare say that compared to some women, and people my age generally, I do consume a lot more food. But it is all fresh nutritious food, part of a carefully worked-out balanced diet, and nearly all of it cooked by myself. I stick to Slimming World rules, and don't cheat. I am convinced that what I eat, and the amount I eat, helps me stay healthy, active and mentally alert as I get ever older. I doubt if I'll ever get rid of my big tummy, but my weight is stable and my skin, hair and teeth are all in very good condition.
Back to those slightly-too-small blue plates. Matters came to a head early on in my five-week trip to Scotland and back. I got fed up with having to pile food onto my dinner plate, just to get it all on - and the nuisance of occasional spillages. I must buy bigger plates.
It happened that two days ago I went to Chichester, at the far end of West Sussex. It was a good place to shop. It was also a lovely sunny day, and I was in the mood to visit my favourite veggie eatery there, Café Paradiso. Replete with my usual Veggie lasagne and salad, and with coffee, I began looking for melamine plates. I had realised that there are plenty of melamine plates on the Internet, but most were, like my blue plates, only 10 inches wide (25 to 26 mm), and almost inevitably one would have to buy at least six of them, or else a set that included other items such as bowls and cups. But I wanted to choose just four plates that one could buy singly after personal inspection.
I found what I wanted at Lakeland. Oval plates (Lakeland called them 'platters'), 10 inches by 14 inches, with a bluish-green garden-flower design. Not as sunny and cheerful as my blue plates, but pleasant enough. Here they are at home, in the shady light of my conservatory: 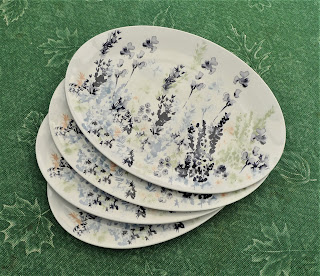 And this is how the old and new caravanning plates compare for size: 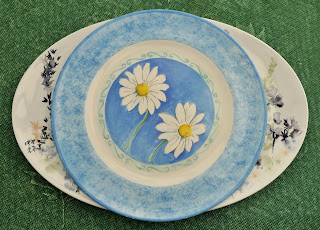 Applying the formula, each new Lakeland melamine plate had a surface area of π x 5 x 7 = 110.0 square inches. Compared with 78.6 square inches for each of the old blue plates. That's 40% larger. And also a little bit larger than each big white Denby china plate used at home. I could really spread my food out now!
Here, for instance, was a tinned salmon salad I enjoyed for lunch while in the caravan, on an old blue plate: 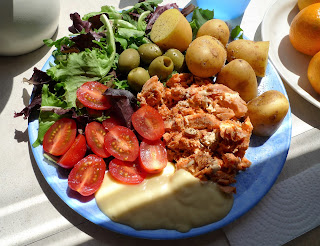 I just about got it all on. Well, here is virtually the same salad on a new Lakeland plate: 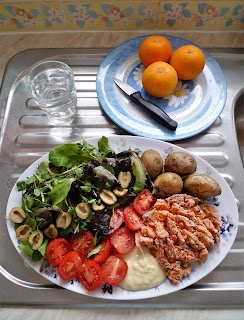 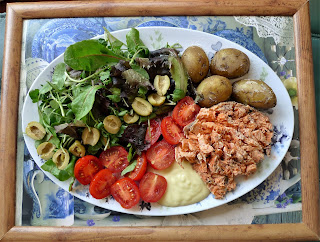 It looks twice the meal, but the quantities are the same, apart from the salad leaves - I was able to get more of those on the new Lakeland plate. The real difference is that the larger oval plate permits me to spread everything out, rather than piling it to form a mound.
It works for other kinds of meal too. I used one of the new Lakeland plates for the sea bass fillets I cooked up later that same day: 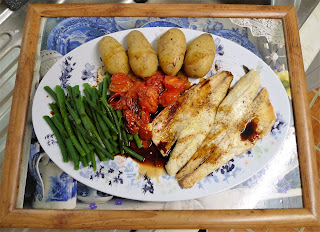 That looks much better!
The old blue plates are not redundant. They have now found other uses. For instance, they will henceforth do well as plates for peeling dessert fruit on, as here: 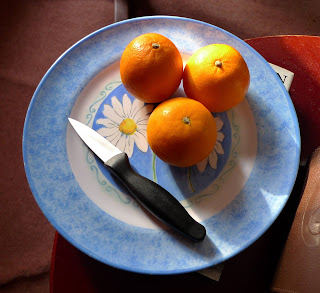 At home or away in the caravan, I get through six tangerines (or similar) every day, three at lunchtime, three in the evening. But these blue plates will also be good for certain kinds of snack.
All set then for my next jaunt in the second half of July!
Posted by Lucy Melford at 15:44