A week ago I was mowing the edge of my front lawn and brushed against a shrub of my neighbours', which had been planted (not by them, but by the people they bought from last year) quite close to the fenceless boundary between us (which is 'mine', and marked by a row of cemented bricks).

Anyway, this isn't about a boundary dispute (we get on very well) but a tale of unwelcome guests, as my brushing against that shrub disturbed a wasps nest we knew nothing about. The reaction of the wasps was immediate. Like a swarm of jet fighters, they flew out to defend their newly-established citadel, and buzzed angrily about me. Three of them - Top Guns all - homed in on my right thigh and stung me there before I could retreat. (Why does my right leg always get the punishment?)

The stings were like hot needles, a bit like having some electrolysis done, if you ever have.

After the momentary smarting faded, I felt nothing and finished the rest of my front-garden mowing. Then I rang my neighbours' doorbell to give them the disturbing news that they had a wasp nest on their hands. This would be especially bad news as they have two young boys. Still, the remedy - calling out a wasp man - was easy to arrange. Within the hour, my neighbours had got a local man round who, with protective suit donned, and lethal chemical dust probe/puffer at the ready, did his stuff.

The wasps fled, not stopping to claim asylum, nor argue their eviction on a legal technicality, nor to insist on their human rights. Presumably the queen wasp, who couldn't of course get away, died surrounded by her most faithful courtiers. Some would have stayed with her to catch her famous last words; others (all of them plotters and intriguers) to learn her political will and testament and jostle for position in the post-queen vacuum. But they too would have died. As also would have the thousands of unhatched baby wasps. An epic Götterdämmerung indeed.

I don't know what my neighbours paid for this call-out, but when I had a wasp nest in my attic in July 2010, and called out Rentokil (who must be among the most expensive), I paid £89 for a 'next day' service. I hope my neighbours paid no more than that in 2022.

I was still not having any physical reaction from the stings. My neighbours were most concerned. But clearly I wasn't allergic to wasp stings. Actually, it had been so long since I'd been stung by a wasp - was it in the 1980s? - I couldn't have said what my reaction might have been.

Within a day, light pink patches had formed around the sting sites, and these turned darker pink and spread a little. Now and then I felt a slight itchiness, but it could be ignored. There was no tenderness. And really that was all. Nothing that could be called discomfort, let alone a worry. And now, a week later, the pinkness has faded. I should think there will be very little trace of those stings by my birthday on 6th July.

The last time I was comprehensively attacked by insects was in New Zealand in 2007. The west coast of each island - but particularly the west coast of South Island - was notorious for the biting Blackfly or Sandfly, or Te Namu in Maori. In Milford Sound visitor centre was a notice that explained how this annoying insect came to inflict humans: 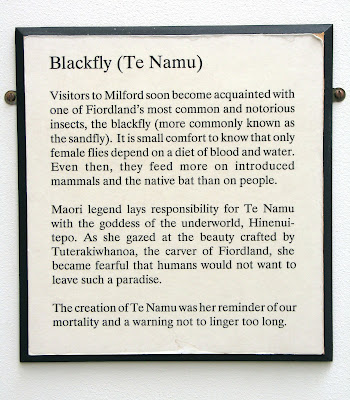 No doubt a similar explanation applies to English wasps.
The Blackfly were a dreadful nuisance. All you could do was cover up the parts they loved to bite, no matter what the humidity. This is a close-up of one trying to get into our campervan. Note the 'devil's horns': Their existence rather took the edge of visiting south-west South Island, which had glaciers, gorgeous empty beaches and fabulous coastal scenery like Norway's. I can't resist a few shots to show what I mean. 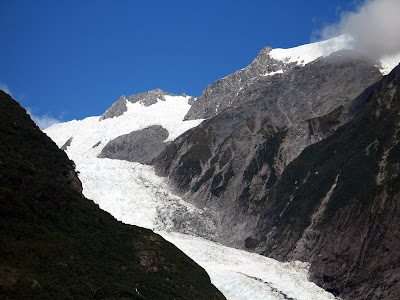 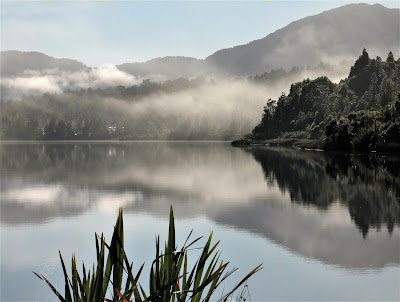 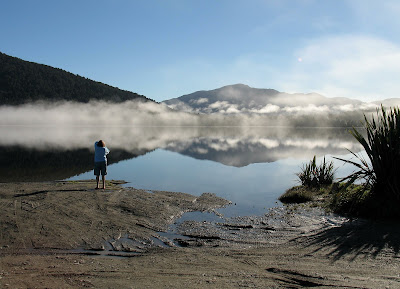 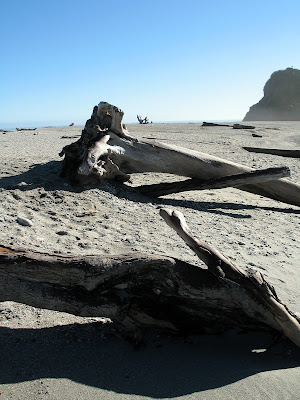 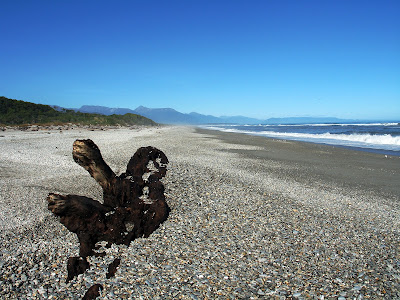 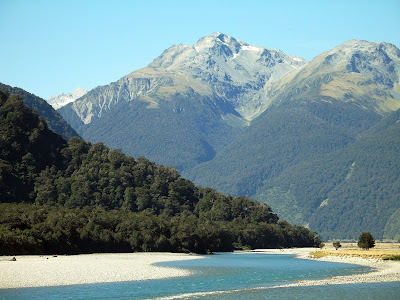 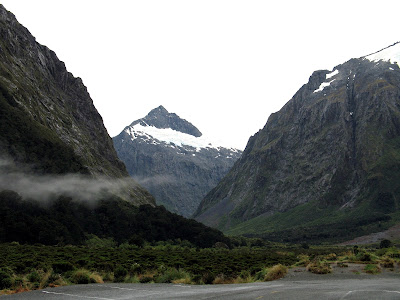 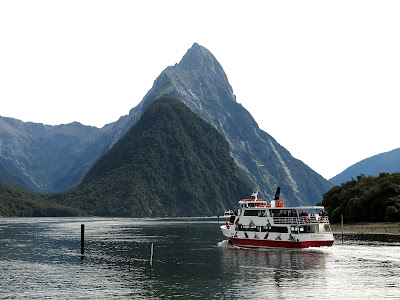 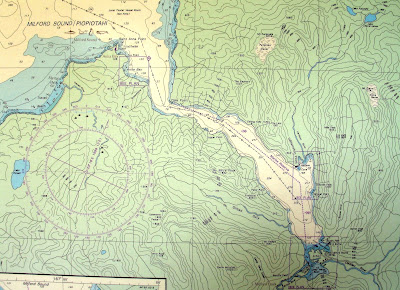 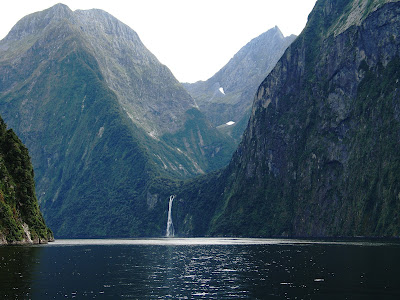 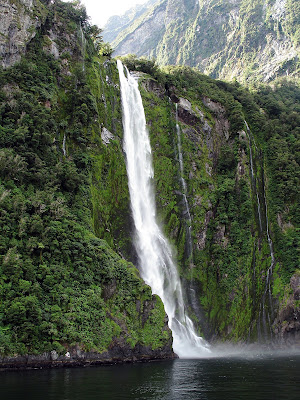 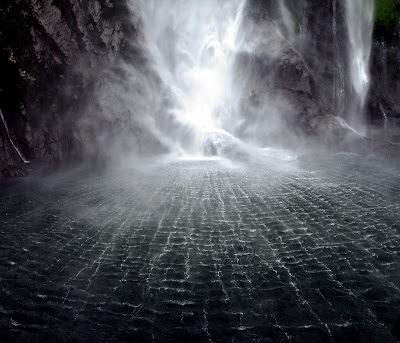 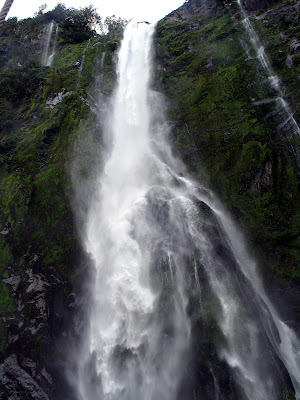 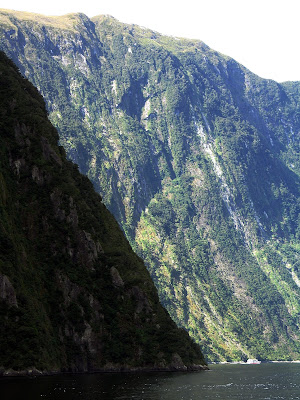 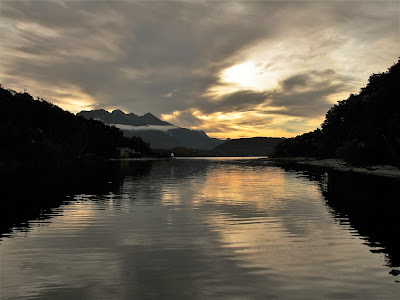 All those views were to some extent compromised by the pesky Blackfly, who never let you alone unless well out to sea, or, if on land, well away from any kind of water. I'm glad to say that the New Zealand landscape made the greater impression on me, but I've not forgotten the Blackfly in Fiordland, any more than I've forgotten equally feared encounters with midges on the wet west coast of Scotland.
How sad to think that I shall almost certainly never be able to go back and repeat that 2007 blockbuster holiday in New Zealand. Partly for health reasons, partly because of the cost, and partly because the world has changed and the risks of flight over certain territories seem greater. Sigh.
Posted by Lucy Melford at 08:47