My latest camera, a Leica X Vario, was bought online on Monday 16th May, and these are the events of the following day, when it arrived at my doorstep courtesy of DPD at 10.37am, right in the middle of the one-hour slot notified to me at breakfast-time. I have to say, the delivery companies seem to have upped their game wonderfully since the start of the lockdowns in early 2020. Gone are the days when delivery could be 'any time in the morning' or 'any time in the afternoon'. It's precise now, and the delivery people seem able to keep to it. Something to help them do that must have happened in the background, but I don't know what.

Anyway, there was the parcel. I carefully slit the top open, expecting a sea of polystyrene pellets with only a camera embedded somewhere in it. I got more than that. On top was the mpb.com paper purchase invoice. Then, underneath a big dark box, and a separate packet. 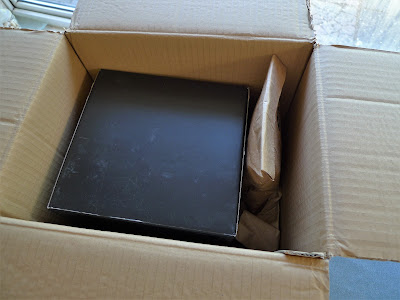 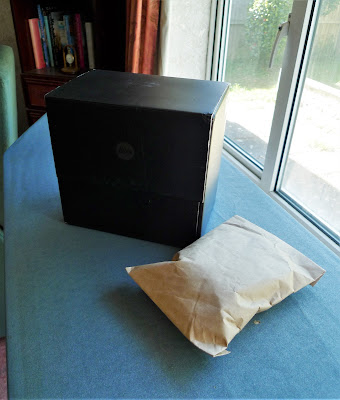 As anticipated, I hadn't been sent the clever silver cardboard outer box that for years Leica had been fond of using, that spread out like the unfurling petals of a flower. But I did have the inner box, the one that contained the camera, the documentation, and various accessories. I really hadn't expected to get either box. Would I perhaps get all the usual things found inside the inner one? 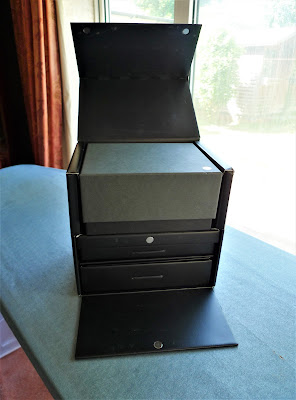 The inner box was very similar to the one that housed the Leica X-U that I sold recently. As you can see, its interior consists of a box for the camera itself, and beneath that, two pull-out drawers for the other things. With magnetic catches for the flaps. High-level packaging indeed! Most impressive, Leica! But then, you'd expect nothing less for a camera that, when sold as a current model, would have cost over £2,000. 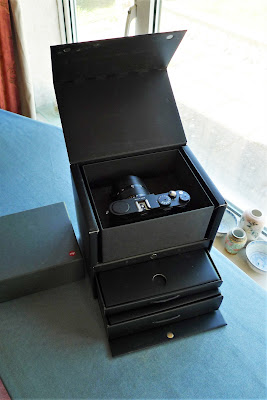 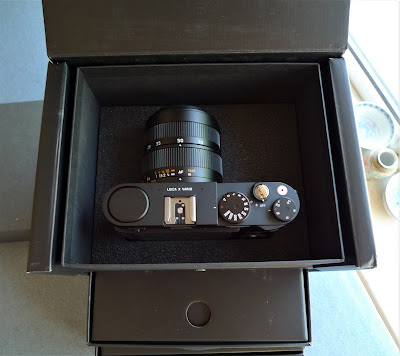 And this was the Leica X Vario in my hand. It seemed to be much the same size and weight as the Leica X-U, but there were differences. The X Vario's zoom lens was longer but slimmer; the top plate included a pop-up flash at the left end; and the finish was silky-smooth black metal and black leatherette. The ruggedised and waterproof X-U had been swathed in rubber, and its metal parts were silver. Both cameras were superbly well-made, but the X Vario was definitely the more elegant. A camera to fall in love with on sight. Little arrows struck me again and again. Ouch!
mpb.com had described this camera as being in 'Good' condition. Were they right? I made a close examination of it from every angle. (Nearly all the photos were taken with my little Leica D-Lux 4, which has made a pretty good job of it. It's an excellent camera for close-up work)
That's the standard plastic lens cap. It seemed pretty secure.
That's the Vario-Elmar lens. As you can see, it's not fast. Maximum aperture is only f/3.5 at the widest focal length of 28mm. At 70mm, at the telephoto end of the zoom range, the maximum aperture is only f/6.4. This is the penalty for matching a zoom lens to a decently large APS-C sensor: to keep it reasonably small and light, the zoom lens has to be on the slow side. But I had hopes that, to compensate, my X Vario would have extra light-sensitivity to make the most of the light gathered in by its lens, and could use high ISOs.
I continued my inspection. The camera seemed without blemishes and more than merely 'Good'. Click or tap on any of these pictures, to really take a good look.
The plastic insert for the hot shoe, that would also cover the port for an electronic viewfinder, wasn't in place. It was only a minor part; nothing essential; so it didn't matter one bit if it had been lost.
So far so good! It was almost 'as new'. What about the baseplate? That would usually show tell-tale signs of any hard use.
No. Super clean and entirely unmarked. The bush for mounting on a tripod looked as if it had never been used. There was the all-important serial number: 4794548. That told me the camera was manufactured in 2013 or 2014. So it was eight or nine years old. Although Leicas don't fall to bits, nor damage easily, it was still hard to believe that this one was so old. It could hardly have seen heavy use - or indeed much use at all. (I would change that)
The flash might have had more to do than was normal on modern cameras, to brighten up pictures taken in the kind of dim light the lens might struggle to cope with. But when I moved the switch to release it, it popped up nicely, like an eager little frog. And not like a tired old toad. The mechanism was pristine.
Verdict: I'd have rated the condition of this camera as 'Excellent', not merely 'Good'. mpb.com must surely have made a error. They could have asked more than the £599 I'd paid. Well, lucky me.
Now for the documentation. Would I have the full set? 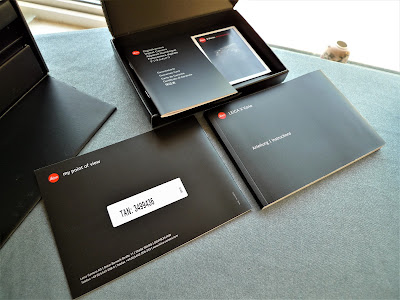 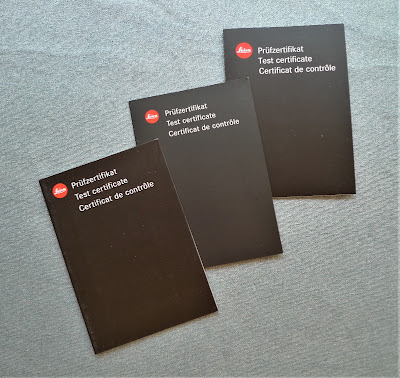 It was all there, except possibly the leaflet that would have explained how the original purchaser back in 2013 or 2014 could claim their free copy of Adobe Lightroom (a stand-alone single-purchase product then, but subscription-only now). And the leaflet that would have urged them to join Club Leica. The three factory test certificates were an especial prize. One was for the camera itself: 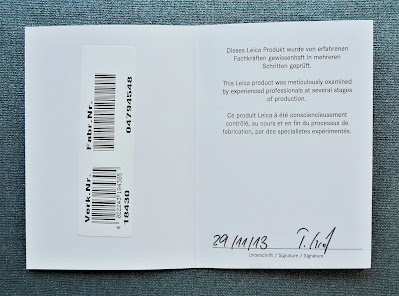 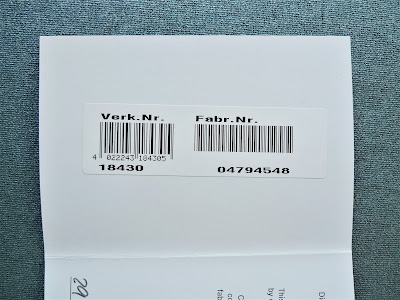 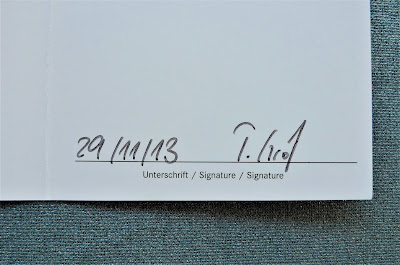 It showed the serial number 4794548, and gave the date the camera was cleared by the factory for shipping to a retailer, 29th November 2013. So: a 2013 camera - and presently eight and a half years old. This particular document was practically the camera's birth certificate. Not to be lost.
The two other certificates were on the same lines, but it wasn't obvious to me what items they covered. Perhaps the lens assembly, and the internal electronics?
Next, the accessories. I opened the sealed packet first. 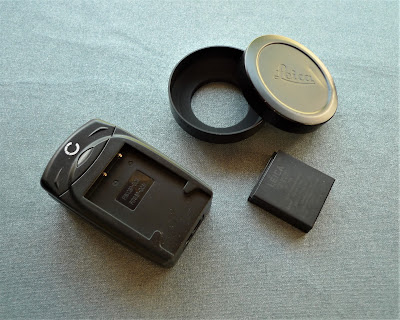 Oho! A third-party battery charger - and better than the standard charger Leica supplied for its X Series cameras. Where was its cable, though?
Still, there was a most welcome extra: a spare battery. A proper Leica one. The ones for the X Series (in truth, any Leica series) are expensive: the identical spare battery I bought for the X-U in 2021 cost me £75.
There was a third accessory: a metal lens hood, with its own metal cap. It was an official part made by Leica for the X Vario, and another costly item. I immediately decided to use it. Lens hoods not only help prevent lens flare, they protect the front element of the lens. Metal hoods especially. 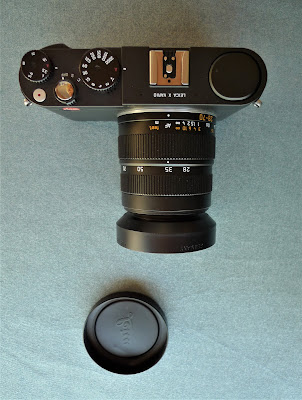 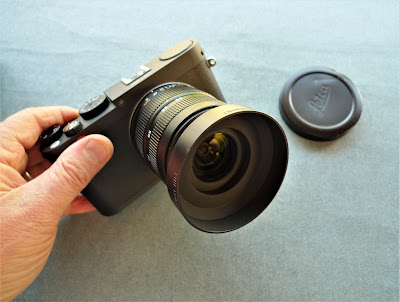 I noticed now that the hood cap had taken a ding a some point, as it had a small dent in it. The cap was otherwise intact.
I don't think you would notice this dent much at a casual glance, but it was definitely a sign of some past mishap. Most likely the camera swung into something. The dent didn't worry me: it was a minor battle-scar, part of the camera's individual history. Whatever had happened, the cap had taken all the impact, and the rest of the camera hadn't been damaged. Maybe mpb.com had downgraded the camera from 'Excellent' to 'Good' because of this dent, although it affected only a replaceable accessory, not the camera itself. But no doubt they knew from experience that a fussy buyer would cavil at paying for an otherwise great-condition camera, if there were damage to anything at all.
So what was in the bottom drawer of the box? Another haul. The charger cable, and the USB cable for connecting the X Vario to a laptop, for the transferring photo files. 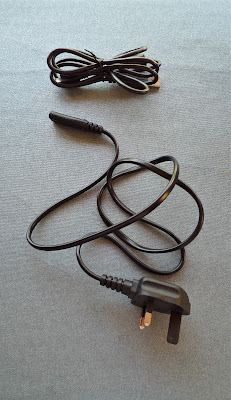 There was already a battery in the camera, well-charged. So I popped the spare into the charger and plugged it in. A red light showed while charging; it turned green once the charging had finished. 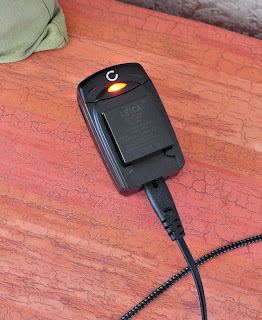 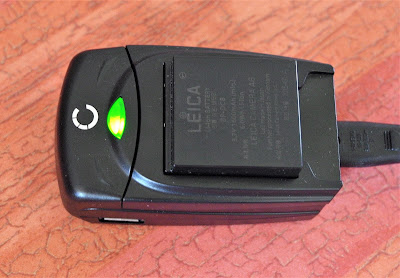 The camera needed a memory card. I already had a new 8GB SDHC card to hand, one of a pair I'd bought some time ago. I now slipped it in next to the battery. 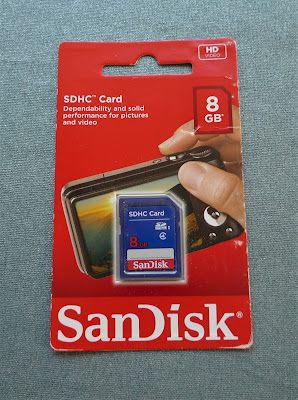 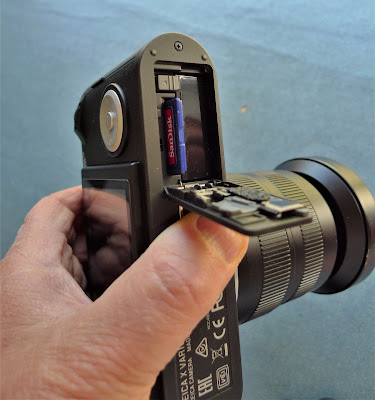 Two further items were needed: a neck strap, and a bag for carrying the camera and to protect it.
There should have been a Leica neck strap, but it was missing. However, I wouldn't want to use it, if it were anything like the official Leica one that came with the X-U. Fortunately I still had the third-party neck strap I'd used instead with the X-U, and fitted that to the lugs on either side of the X Vario's body. A carrying bag could wait.
I was ready to take photographs! 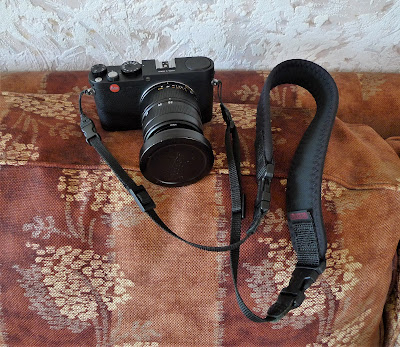