The continuing story of my 70th Birthday Ring.

A few days back, I discussed the ring metal with Rebecca at Pruden & Smith in Ditchling. I'd already raised the budget for the ring to £1,000, and so I could have white gold instead of silver. She now showed me the difference between 9 carat gold and 18 carat gold, as seen in this picture I took of her finger, with three rings in a row: 9 carat gold (left), platinum (centre), and 18 carat gold (right):

If I wanted white gold, she recommended 9 carat (the leftmost ring). 18 carat gold (rightmost) was darker, and would look dull against my silver rings. It was also, of course, softer. So 9 carat gold then. I didn't want platinum (centre): it looked cold to my eyes.
Now to the stone itself. I had been considering a topaz, but my budget could now stretch to a sapphire. I didn't want an intensely dark stone. A lighter-blue sapphire then. We'd meet again at the end of the week, and she'd show me a selection of suitable sapphires. I showed her a picture of my left eye, which displayed several shades of blue and green, and I wondered whether I could have a stone that matched one of them.
I emailed the picture to her shortly afterwards.
And so to yesterday. My friend Jo had asked whether she could come along. Of course! And so appropriate, as she would represent the group of local girl friends who were contributing to the cost of the ring, by way of their birthday present to me. Here she is, sitting at the old jeweller's workbench Rebecca uses for discussing commissions with clients. Light floods in from the north-facing window, so that items can be examined and assessed in natural illumination. 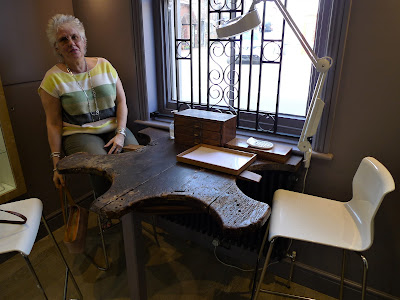 Rebecca had got together several stones that met the general brief, with one or two that were a reasonable eye-match. We quickly eliminated all but these three:
The middle stone was very nice, but too purple for my taste, so that was set aside too. Leaving just these stones to consider:
Hmm. Both attractive. The one on the left was much closer to my eye colour than the one on the right. And it had more sparkle. Rebecca mounted it on the silver shop-display ring so that we could could see what it would look like on a finger. Here Jo is holding the ring... 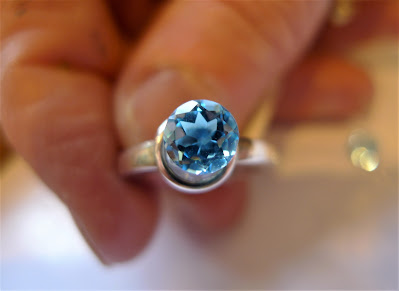 ...and here I have it on my little finger. The finished ring would of course be sized for the adjacent ring finger. 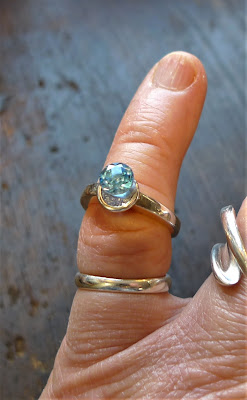 Very nice indeed! It definitely caught the eye. A good blue-green colour. Now for the other, bluer ring: 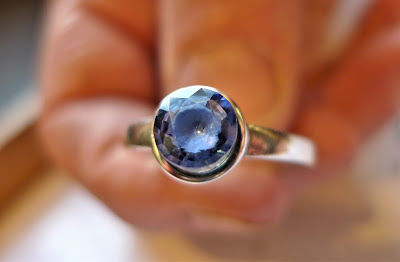 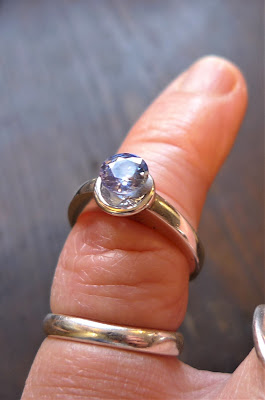 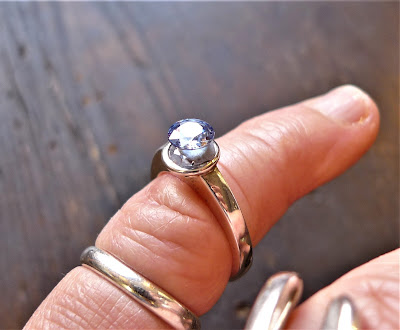 And, away from my finger, this was the bluer stone in its storage box: 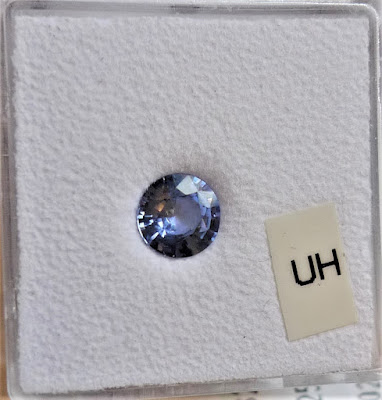 Hmm! I was very much taken with the first ring, the sparkling blue-green one. And it was much the better match to my eyes. But this darker, bluer ring had a different appeal. It was less glittery, but had more colour-depth. It was subtler. At this point Rebecca revealed that the eye-catching blue-green ring was in fact a topaz. The quieter, more subtle ring was a sapphire.
Well, that settled it. I'd set my heart on a sapphire, if the money was going to stretch to one. It was a higher-status ring, but also made sense for durability, as sapphire is a harder stone than topaz. I liked both, but for choice it had to be the sapphire.
Jo said that's what she'd choose too, and made the point that as this was going to be a ring I intended to wear all the time for the rest of my life, it needed to be one that I would always be happy with. She thought that I'd tire of the topaz's glitter. It was all shiny surface. The darker sapphire had a deep mysterious heart that would make it more fascinating to wear in the long run. I felt she was right.
So there we are. I have paid a £500 deposit, and Rebecca will get to work with a deadline of 30th June, several days ahead of my birthday on the 6th July. In fact, however, I expect the finished ring will be ready before then. I will go in to try it on, and if satisfied will pay the balance and take my Birthday Ring away. But not to wear immediately. Oh no! I must surrender it to whichever of my girl friends is going to gift-wrap it. It will be presented to me at one of our customary birthday lunches, as close as possible to my actual birthday. And only then will it adorn my ring finger.
I don't mind that the chosen stone doesn't closely match my eye colour. In fact neither of the two stones considered would have. Look at these laptop screen shots, in which I compare my eye to each stone. The topaz first, then the sapphire: 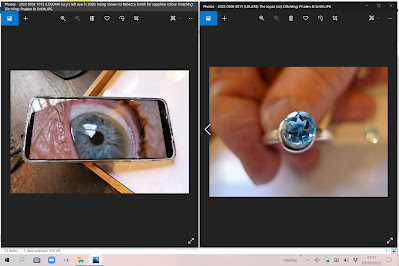 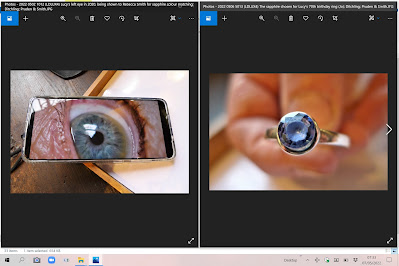 The same camera (the little Leica D-Lux 4) in each case. It seems there is much more green in my eye colour than I would have believed. Surely, when I was younger, my eyes were bluer? Oh well.
One thing about sapphires that I've recently learned is that they nearly always have inclusions, which are filaments and speckles of other minerals, trapped within the stone as it was being formed. These affect the transmission of light through the stone and give each sapphire a certain character of its own. If you scroll up and find the larger picture of Jo holding the ring with 'my' sapphire stuck onto it, and click or tap on it (to bring up a clearer picture you can magnify), you can just make out a swirl of speckles inside the stone (underneath the table, its top facet). These speckles are inclusions. I'm reminded of the bits and pieces - such as pollen and seeds - found in old amber, although this is purely a mineral thing. The presence of inclusions is a guarantee that the stone wasn't made in a lab, as synthetic stones would be perfect and not show traces of impurities. It also confirms that the stone hasn't been subject to heat treatment, often used to enhance its colour. Heating would tend to get rid of obvious inclusions.
This sapphire will go well with my favourite neckwear, such as my silver and pearl necklaces: 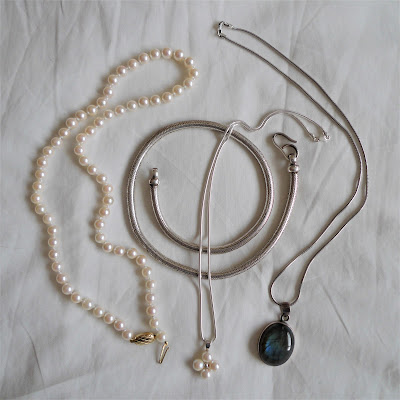 It may also pick up on the blue in my labradorite pendant fairly well: 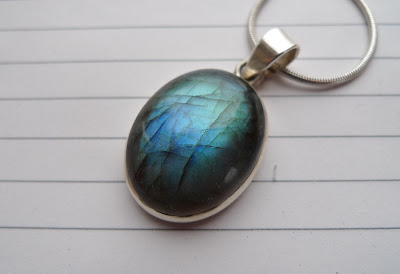 One thing's for sure. I wear a lot of blue clothes, and the ring - and its sapphire - will go well with most of my wardrobe!
I need now to find a name for my ring, based perhaps on its being gold, or set with a sapphire, or marking an important birthday. It's very tempting to concoct something that has the suggestion of Old Norse, or the Anglo-Saxons - a name that would look good if written in runes. But I've also been thinking about names that reference the particular blueness of the stone. For instance, it reminds me strongly of the dark blue of an evening sky after sunset - a favourite time of day - when the stars are beginning to come out, and the moon is visible and rising.
I can at least give an assurance that, although this ring is my Birthday Present, I won't be calling it My Precious!
Sequel
I've had several names in mind, such as Eveningstar, Twilight and Serenity. Now I've thought of Blueheart. And there's always the obvious one, Bluestone (which reminds me of Stonehenge). All of them appropriate names of course. I have two months to think about it.
It's no wonder that I like the blue colour of the sapphire: it's almost the same as the colour of my cherished car Fiona!
Posted by Lucy Melford at 11:07