Now the results from my early evening walkabout in Brighton. Remember this was only Day Two of ownership, and while I was used to how Leica X Series cameras handle, I was still feeling my way with the capabilities of the zoom lens on LXV.

I particularly wanted to discover how suitable the camera was for distant or high-up subjects, and for grab shots of people. Of course, Brighton being the place it was, there were posters galore, and plenty of street art.

These are just a few of the many pictures I took. All were handheld. Some have been cropped, and the finished shot shows just a portion of the original. One or two have been 'worked on', to create non-realistic effects that (in my view anyway) make an interesting picture. The ambient light was adequate, but slowly fading. Sunset was at 8.47pm, but clouds in the sky mostly hid the sun.

Having parked Fiona, I wandered past the Theatre Royal and its adjacent bars, just to get some shots of people having a relaxing drink outside: 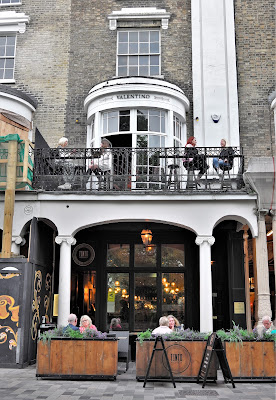 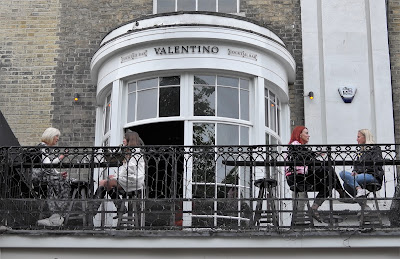 It was so easy (and worthwhile) to use the zoom, which on LXV is manually controlled, and not powered by a whirring motor - a short and quick twist of the zoom ring instantly gets me from 28mm to 70mm, to bridge distance and see more clearly what is going on. The slow and noisy zooms on previous cameras discouraged me from much zooming. That may now change.
Intricate graffiti and luridly-lit amusement arcades are a standard part of the seedy Brighton scene. 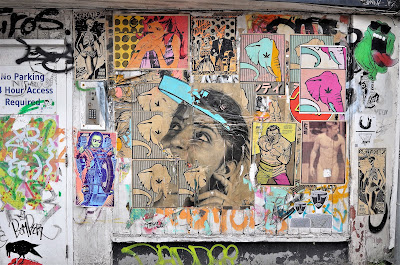 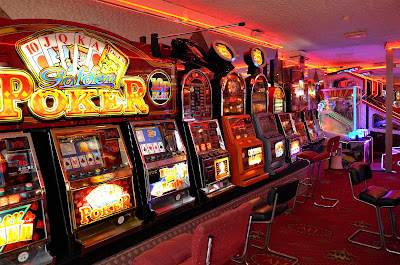 I thought the amusement arcade shot would be more of a blur, as the light level was low, but it turned out fine. The ISO used was only 250. Clearly, LXV is not dead metal in dim surroundings, so long as there are hot spots of good strong light.
The Leica X-U couldn't take pictures of tall buildings, such as churches with towers and spires, which had been irritating. Its 35mm lens simply wasn't wide-angle enough. Would LXV's wider 28mm lens be enough? It was - just. Here's one of Brighton's famous Victorian churches, one with a decidedly Gothic look. I dare say Batman, the Caped Crusader, likes to attend services there. 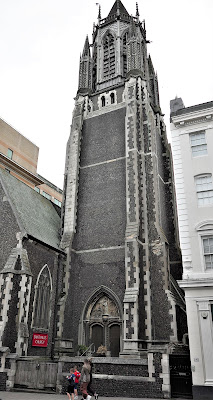 Further down the road, a cartoon face confronted me. 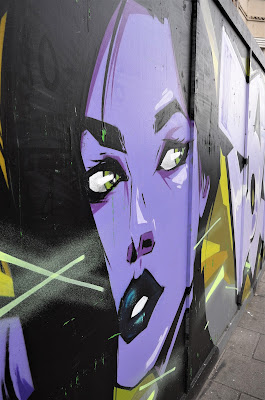 Crossing the road revealed a polished bit of street art on hoardings that were hiding the empty space left by a demolished building. Those steels didn't look quite strong enough to prevent the still-standing buildings on either side from falling inwards, if the wind got up! Surely they'd bend? 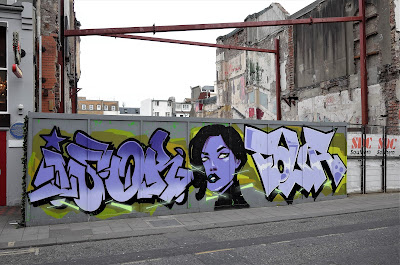 And so to the seafront. A lot of people were heading for the cinema entrance, presumably to see the Top Gun sequel. 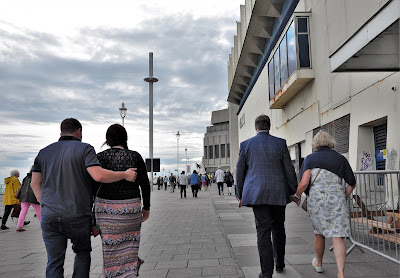 Long ago I learned to shoot people in the back - it's the safest way! The out-of-camera shot showed only silhouettes in the iffy light. But laptop processing has brought out the shadow detail.
Now a series of shots along the seafront. 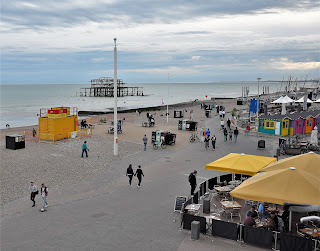 That's the skeletal remnant of the old West pier out to sea. A shameful relic of its past glory, now just an awkward hazard for boats and bathers. The time was 7.21pm, and there would usually be more people on the promenade, even on a Wednesday. The restaurants weren't doing a lot of business. The diners bottom right caught my eye. I sidled along for a few feet, then pointed LXV downwards (at 70mm zoom) to get a shot of them. This is the cropped result. 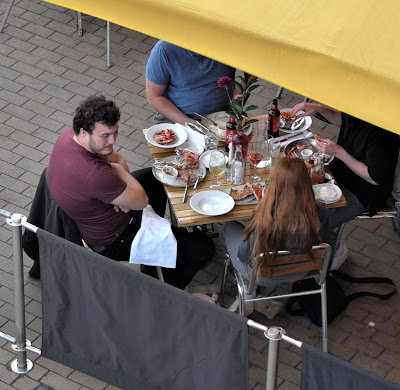 I hasten to say that this isn't the kind of picture I usually take. It's an intrusion into their evening. But it shows that LXV can get interesting detail at a distance. It looks as if they had tucked into crabs, washed down with wine or London Pride bottled beer.
I left them to it and walked on, eventually reaching the i360 tower. 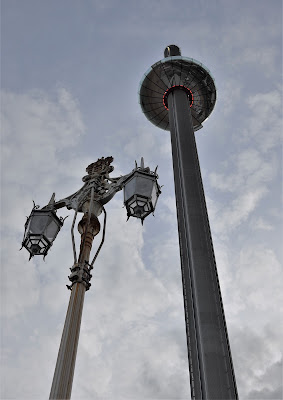 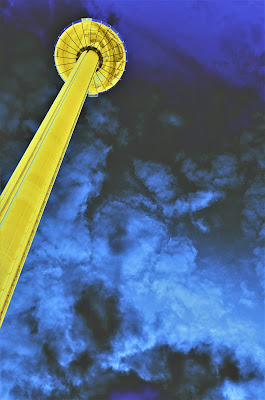 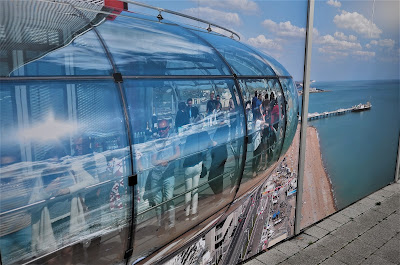 That shot just above was part of a poster. The doughnut that slides very slowly up and down the slender tower is a fancy observation platform with a great view.
I carefully descended some steps (my osteoarthritic knee is a handicap on steps) and (not without concern for my knee) trod my way down the shingle slope to near the water's edge, for some sea-level views of the gaunt West Pier. 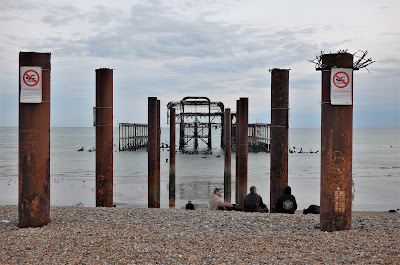 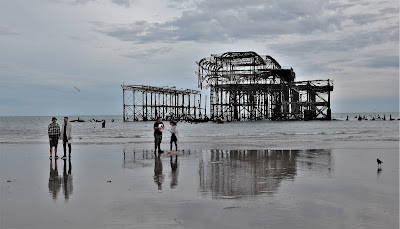 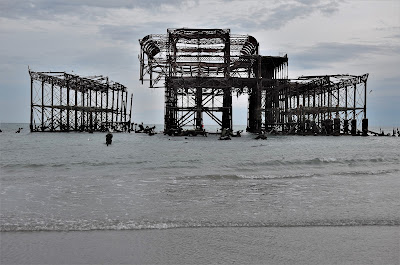 The light was not what it had been. I climbed up off the beach and headed back, taking in various shots of people, such as this young woman taking a selfie of herself in front of a singer trying hard to entertain an invisible audience: 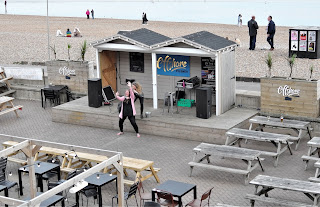 There was now a queue at the cinema across the road. Nobody saw me snatch this shot - except the one man on the far right. (There's always somebody)

Tatty shops abounded. Here's one, with The King of Rock slouching in a doorway: 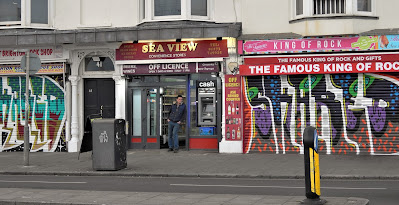 But I preferred the glimpses of high culture along the upper promenade, for which Brighton is renowned. 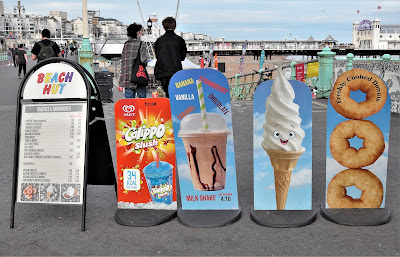 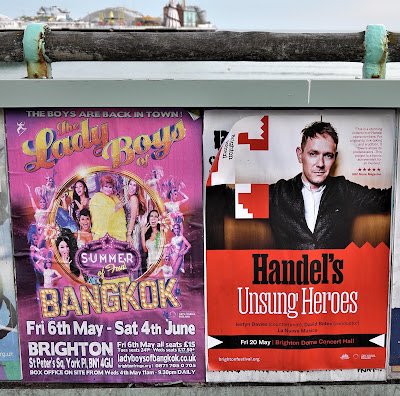 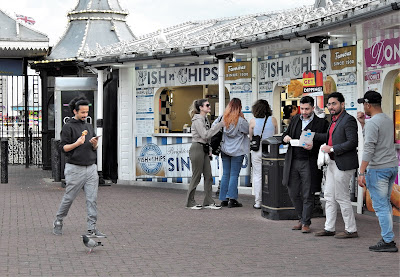 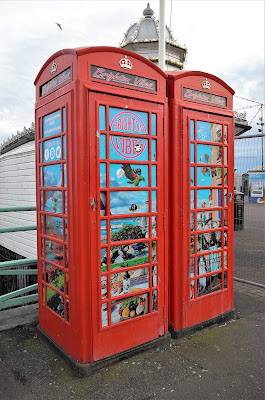 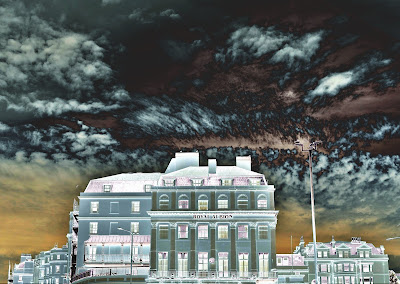 And inland again, the last few hundred yards to the car, passing a couple of big street murals - and further evidence in a shop window that Brighton is the place to go, man, if you like to be truly mellow. 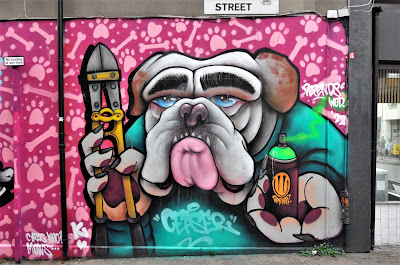 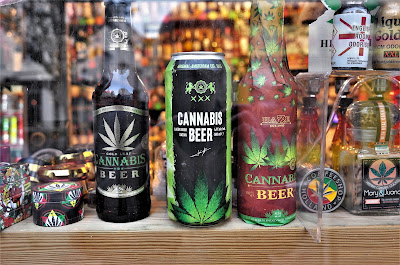 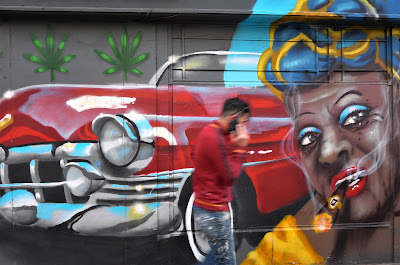 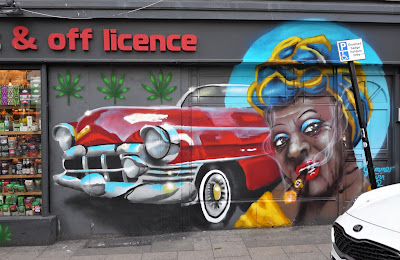 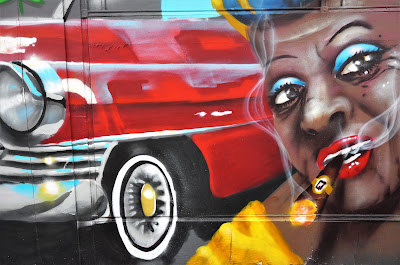 A touch of Havana no doubt. Everyone used to smoke cigars there, didn't they? It serves to show off LXV's punchy colour capture.
Well, I think that my Leica X Vario did rather well. That 'slow' lens is clearly not a problem, given any daylight at all.
As for the taking of these pictures, was I slightly bolder than usual? Did that unmissable red dot on the camera make me more inclined to take pictures with people seeing me do it? I rather think it did. I had the right kit; I was quick and confident with it; so if they noticed, people would (I hope) assume that I was a serious picture-taker, and not just a poser messing around.
That wraps up the initial assessment of my latest camera. I think it was a wise buy. I am very content with it. We are going to bond. I still want to see how LXV does in particularly dark conditions - can it photograph a starry sky, for instance? But it's definitely now my number one camera.
What about the little Leica D-Lux 4? I am not abandoning that one. It'll still have its uses, for those occasions when I can't carry much.
Which reminds me: I still need to buy a bag for LXV. It's warm and sunny just now, but cold rainy days will return as the year flies by.
Posted by Lucy Melford at 15:07