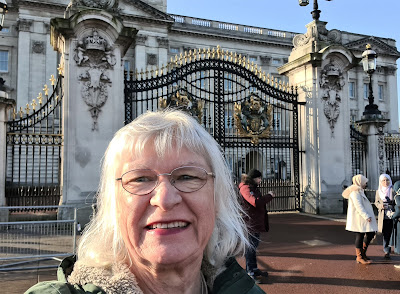 I did take the train to London yesterday, and enjoyed myself. I'm glad I went, although overnight I was in two minds. True, the Covid risk had become acceptable, so long as I avoided crowds and confined spaces. But could I?

The sunny morning persuaded me to make the effort, with a face mask and Lili my camera as my vital accessories. I had been temporarily deprived of my car, but I wanted to demonstrate to myself that I could still get about, and need not be confined to the village.

There was something else, too. Central London had become a no-go place in my mind, and not simply because of Covid. I'd stayed away too long - almost nine years - and I'd developed very negative emotions about the place. Silly, I know; but everywhere in London - and Central London above all - was by now almost Forbidden Territory. It was high time I took the plunge and broke the spell.

Perhaps it wasn't the very best moment to travel there; but then, it wouldn't be seething with tourist crowds, and I would walk everywhere - partly to stay as much as possible out in the open air, and partly to get some really worthwhile exercise. And I had that. Yesterday's step count exceeded 23,500.

Reassuringly, the trains I took up to London Victoria station (I had to change at East Croydon station) were only lightly loaded. As in this view of my carriage. 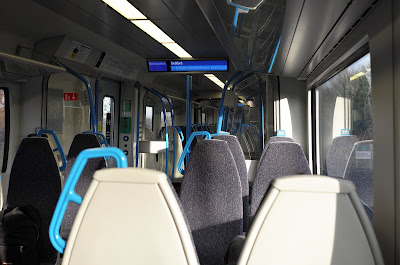 I arrived at London Victoria station around 11.30am, and left at 4.30pm, spending four hours briskly walking the streets of the metropolis, with an hour at the British Museum. I took 492 photographs, at a rate of 100-odd every hour. Well, there was so much to see with fresh eyes. And I might not revisit Central London for months, so I wanted a comprehensive record of whatever caught my attention. I felt super-confident that Lili would capture some great shots for me. And she did, even through the glass of the train window, as I passed the old Battersea power station - presumably repurposed now - almost hidden from view by the much more recent flats and offices that had grown up around it. 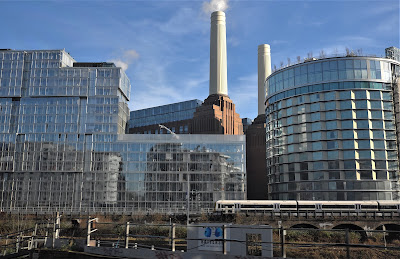 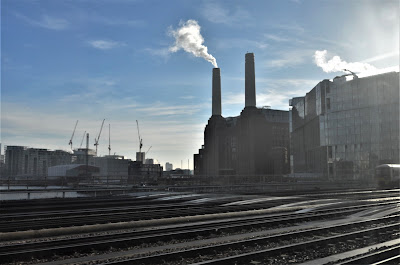 Then we were over the Thames, past the distant views of the City and Canary Wharf, and gliding into London Victoria station.
I braced myself for many intriguing or surprising changes.
The station itself seemed much as I remembered it, only uprated somewhat with different shops and eateries. The old banks of public telephones seemed to have gone, but the electronic information displays were much better. The underground loos had had a facelift, and were now free! Excellent!
I decided that I'd get myself a filled roll from one of the station shops, and settled on this veggie baguette from Prêt à Manger. 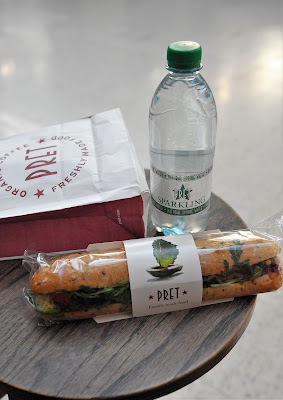 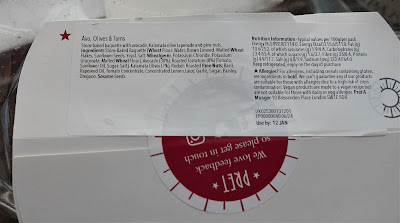 I was able to eat this, plus a few sips of water, at a nearby seat. In busier times - in past years - I'd have to stand. But not these days. The baguette was quite tasty, and filled me up so that I didn't need to buy any more food during my five-hour visit.  And the bottle of water lasted well.
Then out into the street.
I'd forgotten how splendid the heart of London was, with gigantic buildings old and new, and monuments galore, and iconic sights abounding, all bathed in bright sunshine. Everything was oversized, and I found myself craning my neck to take shots of soaring new buildings, like these which confronted me as I left London Victoria station: 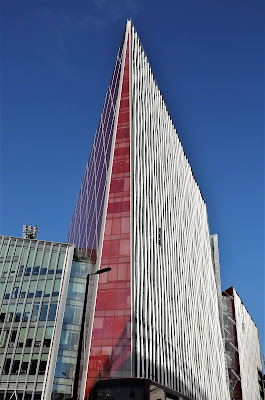 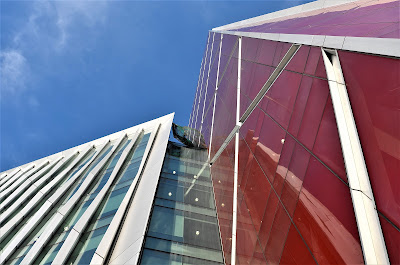 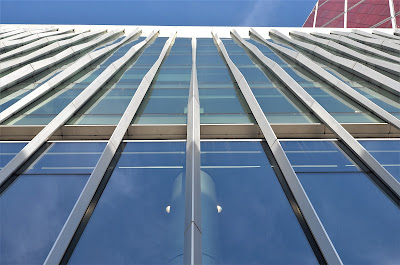 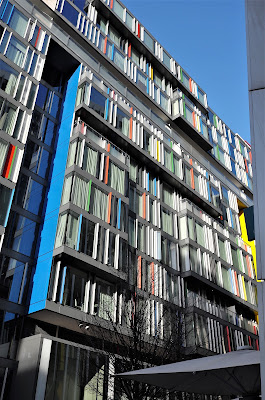 Brighton, my closest 'big city' in Sussex, had nothing to compare with this. Such new builds dwarfed the more traditional landmarks, which were mostly still there, such as the stately Victoria Palace Theatre, and the clock outside. 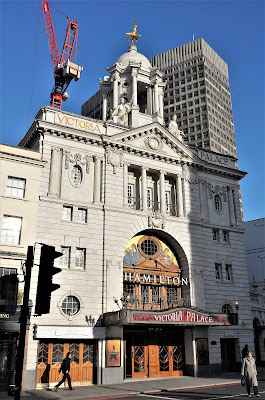 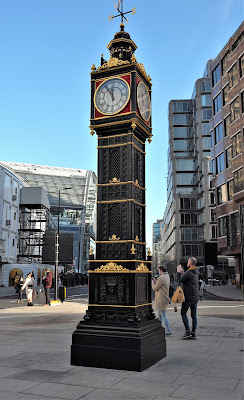 These Victorian/Edwardian buildings and installations now had to co-exist with the super-tall twenty-first century constructions, and the contrast in styles was sometimes stark. 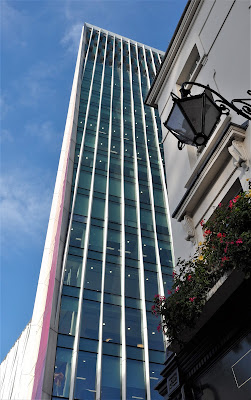 The building work hadn't finished. Construction or renovation were going on everywhere, with tall cranes always in view. 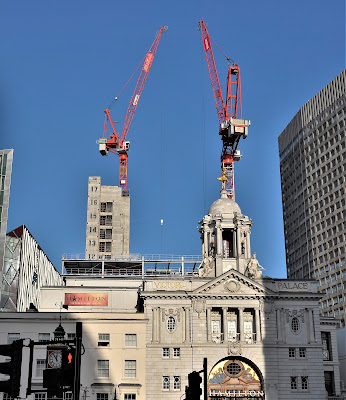 Here and there were old buildings that had been shut, but not demolished, clearly awaiting some planned conversion into something else. Such as this old entrance to Victoria underground station, now barred and inaccessible. 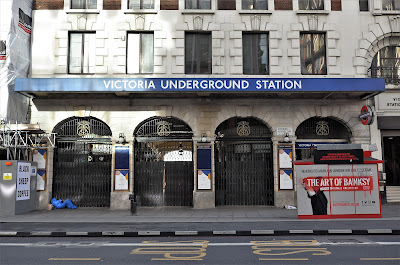 Back in the early 1980s I'd served at Pimlico District tax office, then in an old block opposite those gates. I'd have emerged from those gates in the morning and disappeared through them in the evening. You could walk through that building to the bus station in front of London Victoria mainline station. But there were also steps that led to Victoria underground station, where you could catch Circle and District Line trains, or, at a lower level, Victoria Line trains. No such access now!
I framed the picture to include the advertisement for the secret street artist Banksy, bottom right. At the time I didn't notice the blue mummy-like figure off to the left. Looking at the shot now, I can't decide whether this is a real person on the street, completely zipped up in a sleeping bag, or some kind of art installation, with a plastic dummy inside to give the sleeping bag some shape. I mean, nobody would ever go close enough to find out which.
If an artwork, a serious point would still be made. I passed a number of people slumped in doorways, trying to catch my eye. There must still be hundreds of homeless in Central London. I thought of them later that day, when the sun was starting to set and the evening chill was drawing in. London may have everything that is the biggest, the grandest, the most opulent, the most expensive, and the most impressive; but it also has the largest underclass of unfortunates who have slipped through the safety net. They can't all be independent-minded folk who prefer the cold streets to some hostel.
The red London buses were everywhere, in forms I'd not seen before, like these strangely-shaped examples, which reminded me of the old Routemaster buses of the 1970s, the ones with a rear staircase. 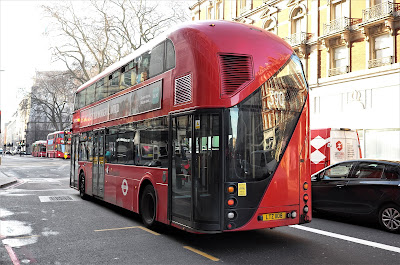 But no casual hopping on and off these modern buses! The glass doors, front and rear, were sealed tight until stopped at the bus stop. Nice that they had reinvented the rear staircase though, and I rather liked that stylish diagonal of glass all to way up to the top.
Leaving the vicinity of London Victoria station, I headed up Buckingham Palace Road. I passed The Royal Mews, then the Queen's Gallery. All embellished with monumental stonework slightly reminiscent of the Parthenon in Athens. 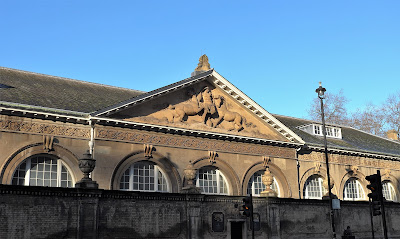 Then Buckingham Palace itself, with its astonishingly elaborate gates, impressive lamps, and interior guards. Some army personnel were about, and in front of the gates were a number of police officers, as if expecting some trouble. 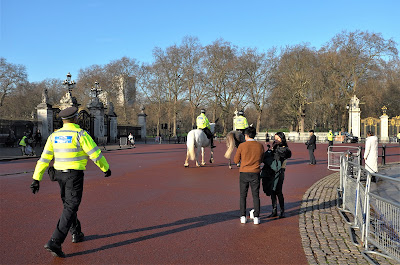 I suppose there are always suspicious folk who need to be moved on. You know, ones with Leica cameras and an out-of-town look to them. I wasn't the only tourist. There was also a sprinkling of others, though nothing like the number that would have been there, even in January, in pre-Covid days. 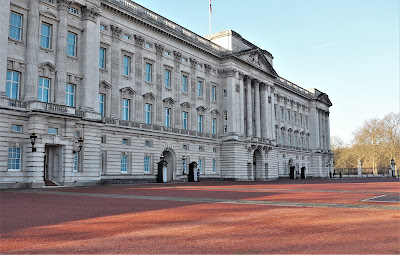 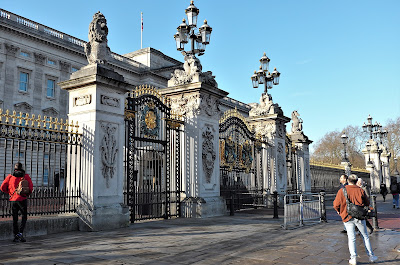 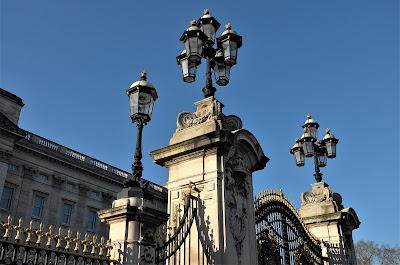 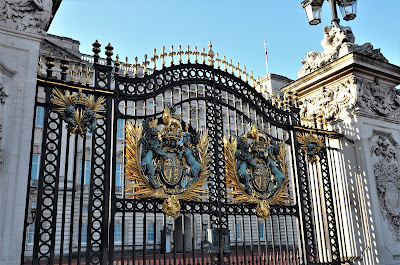 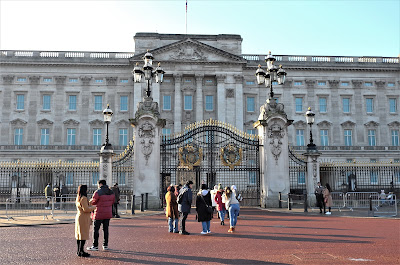 The Queen Victoria Memorial opposite the gates was absolutely resplendent in the sunshine. 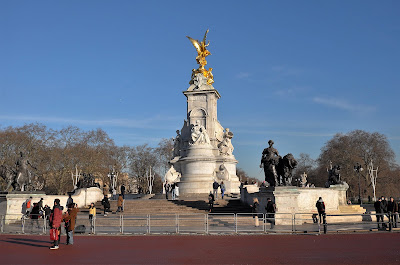 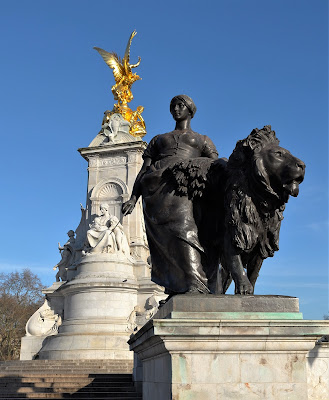 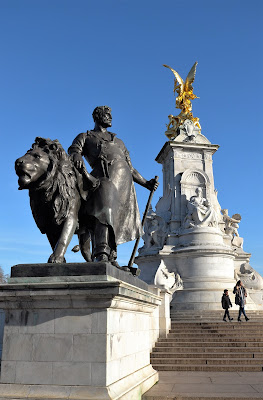 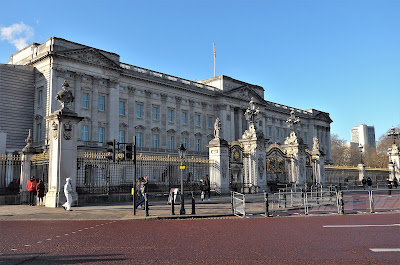 Whatever the richness within, I always think the exterior of the Palace looks somewhat forbidding, and the forecourt very plain and featureless. (Although that might just be to give intruders nowhere to hide, and a clear line of fire for the guards)
Well, that was the first stage of my visit accomplished. Next, the British Museum via Trafalgar Square!
Posted by Lucy Melford at 23:03