Nails taken to the limit 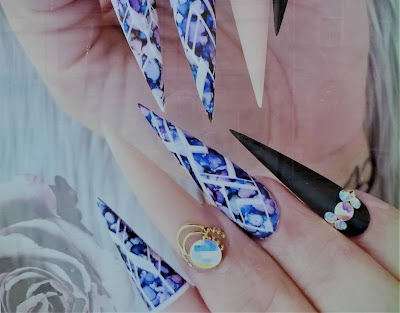 Do you possess long, shapely nails, and give them constant attention? Do you spend relaxing hours in the week painting them just so, in a colour that appeals?

Many women, particularly young women, have such nails and are prepared to spend money on them. The result can look nice. But it's a thing that can be carried to bizarre extremes. More on that in a moment.

I'm now in Scotland, and yesterday I went into Kirkaldy, a seaside town in Fife with an industrial past. I have to say it seems to have lost its way. It certainly has a good beach, but it's backed by a bleak concrete promenade, and beyond that is a long, strung-out High Street that has decidedly seen much better days. There are pleasant residential parts in old central Kirkaldy, lined with big, comfortable-looking detached stone houses that might command a million pounds or more if up for sale in Sussex. 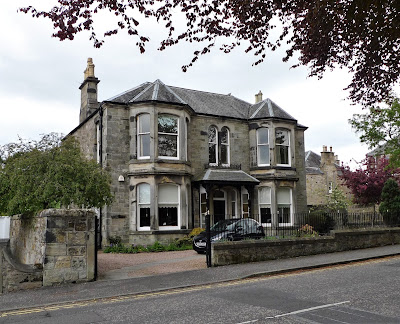 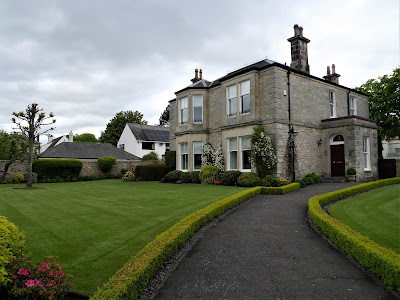 And there are massive, important-looking (though now tired and dingy) municipal, legal and academic buildings. There's a much-admired art gallery and museum, which I have visited on previous holidays. Clearly, Kirkaldy has in the past been the main centre for many things in this part of Fife. I feel also that it must have been a friendly town. But I'm not sure what its purpose is now; and I did not find its big beating heart. I wonder whether it still has one. Perhaps it's already on life-support.

In my wanderings I did discover an active and well-kept bowling green, with a friendly Sunday-afternoon match in progress. 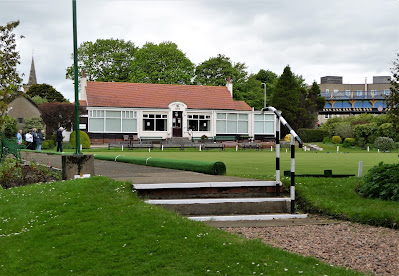 Ah, some life! So some aspects of how Kirkaldy used to be still survive! Maybe there was more of the same to see, tucked away. But I couldn't overlook its forlorn High Street.

I had only just parked my car when I met a cheerful lady called Sandra, who had lived in Jersey for forty years, but was visiting family in Kirkaldy. We immediately started to chat, and in fact we walked the length of the High Street together. She was so nice. I was sorry to say goodbye. Here she is: 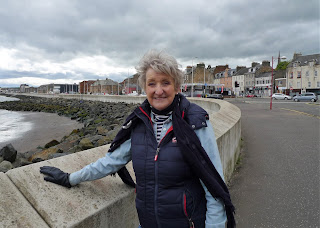 Back to that High Street. It was a somewhat discouraging walk. We had plenty to say to each other, and had a lively chat as we strolled along, but it was impossible to ignore the empty facades of closed-down shops that hadn't been re-let. We kept passing them. And really, apart from Waterstones the booksellers, there was nothing left of quality or culture. There were too many shops selling the sort of things that people with limited incomes might buy. Indeed, this High Street (like many others, let it be said) was now dominated by the kind of shops that catered for the hard up. To be fair, I didn't notice all that many vape shops or mobile phone shops, nor a single betting shop, but I did see two 'casinos' - those places where the bored and brain-dead can play the slots all day if they want - and there were of course shops that sold only things priced at a pound or two, for the bargain-minded. And shops selling goods on rolling credit arrangements, with high-interest terms that trap poor people into a cycle of never-ending debt.
I'm not saying that there aren't towns in sunny Sussex that are much the same. It seems to be a problem wherever you go. Sandra said that even in affluent St Helier on Jersey - sunnier still, of course - there have been retail casualties.
I'd already heard on the news, some while back, about the closure of Marks & Spencer in Kirkaldy, and the local anguish that had caused - even though M&S had reassuringly drawn attention to their other shops out-of-town, and not too far away. In fact, I wanted very much to see what the Kirkaldy High Street branch of M&S presently looked like. It was in a sad state. 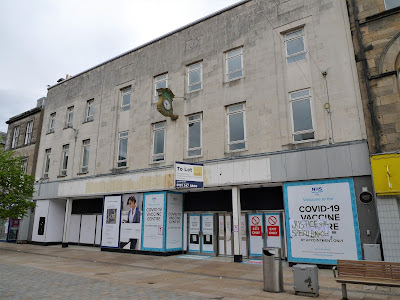 It remained unlet (no surprise). For now it had become a Covid-19 Vaccination Centre. But after that? Would it remain empty, like the closed BhS store nearby? (Yes, is my easy guess) 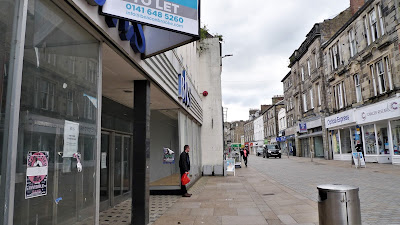 The big shops close up, the big-spending fashion-conscious shoppers have no reason to come to the High Street any more, and the remaining business passes to the little shops that serve those who don't have cars, nor a lot of money to spend. And gradually the town centre goes downhill. I'm not sure that re-letting shop space to restaurants and galleries and virtual reality experience centres is the answer. Perhaps knocking it all down and greening it over to make a lovely park would be the best outcome - but then how would the landlords be compensated for losing their assets? 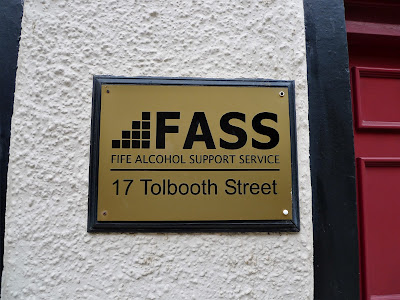 Meanwhile the old problems continue. At least the little shops are having their moment. Barbers, hairdressers, hypnotherapists. And nail bars. All to do with appearance and well-being. Offering services you can afford if you haven't much cash for going out, or to spend on yourself. And let's face it, there are plenty of people around who are stuck in low-paid jobs, or on benefits, who justly want to treat themselves to a bit of fun, or add a touch of glam to their grey lives. Who wouldn't, in their shoes?
There were at least two nail bars on Kirkaldy's High Street. One was called Tkirkaldy Nail - how on earth do you pronounce that? - and the other Sky Nails. Sandra and I looked at the window display for the first: 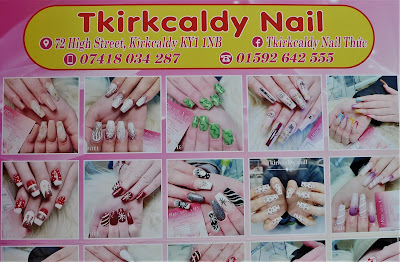 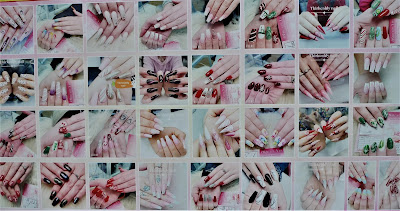 An astonishing range of nail designs was on offer. I have to confess that I always walk on by these shops, but this shop window caught the eye. Most of these nail designs featured very long nails that must surely be stuck over the natural nail. All were artistically painted, and some elaborately decorated with extra encrustations. Quite unlike our own nails. Sandra spread out her fingers. I spread out mine. We both preferred short, unpainted nails. We led practical lives. We didn't care about such embellishments.
It seemed to us that many of these designs, however good or impressive they looked, rendered it impossible for the woman to do anything with her hands. I mean, if you have nails, artificial or otherwise, that are so long that you can't get your fingertips to anything, just how do you function? Maybe you can hold a drink in your hands, but how do you manage delicate touch-ups to your makeup, or wipe yourself when you go to the loo? How do you use a touchscreen phone? It was hard to imagine wearing nails like this for any length of time.
And the nails were very long. Longer than I'd ever seen in Sussex. Practically talons. Perhaps that was it - nails like this made the wearer rather feline. If you were young, ultra-slender, in high heels and had nails like these, you could go clubbing and look extraordinary. I'm bound to say though, that most of the local girls (and older women) I've seen so far in Fife do not answer to the description 'ultra-slender'. But then nor do I.
Did I use the word 'talon' just now? After Sandra had walked home to her sister's, I made another pass of the High Street, and peered closely at the window of the other nail bar. 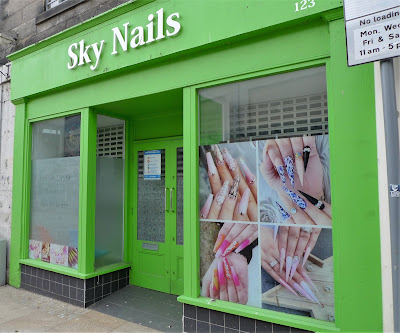 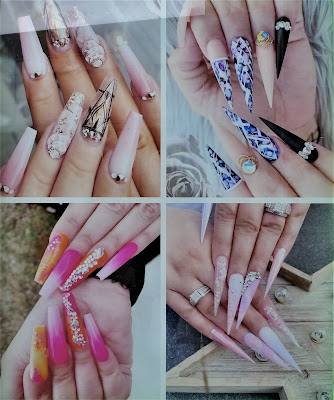 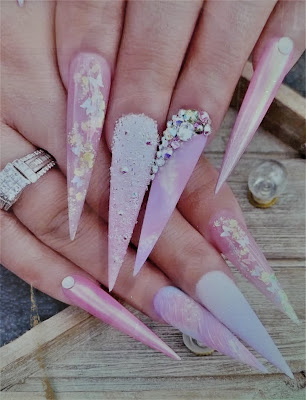 My goodness. The artistry in these - whether ready-made, or hand-finished in the shop - was on an even higher level. And the length! These were daggers! I thought immediately of the spikes one would be impaled on inside an Iron Maiden, that handy standby in every Scottish castle's torture-chamber. In more everyday circumstances, these would keep an over-amorous boozy boyfriend in his proper place. But I wonder how many eyes get accidentally punctured by these seriously-dangerous weapons? Are they legal?
As I said, I've never noticed nails like this in Sussex, nor anywhere else in my travels. Is it then a Kirkaldy thing?
Before I went back to my car, I passed this KFC poster near the old harbour. It showed a woman filling her face with a juicy lump of Kentucky Fried Chicken. At this scale, it was utterly gross. 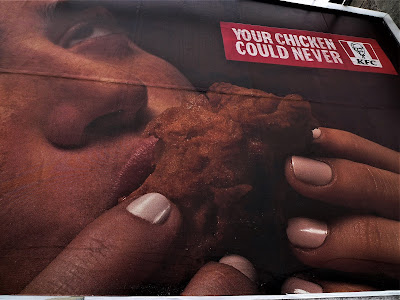 Note her ecstatic rolling eyes. And the painted nails. A salute to Kirkaldy culture? Maybe not - they are sensibly short.
Next to this was another salute to local tastes, this time by McDonalds. Do they live on chicken in Kirkaldy? 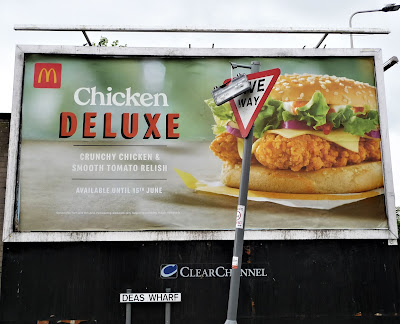 Across the road, a shop apparently selling reptiles to eat (a chicken is a modern dinosaur, which was a reptile), and a hynotherapist (to calm you down, and persuade you that life in Kirkaldy is bearable without M&S or BhS). 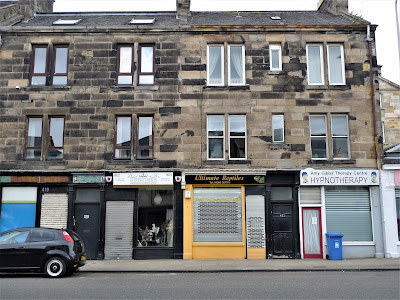 I thought the old harbour by far the most interesting spot in town, with plenty of signs still of its industrial past, an undeveloped heritage with potential, despite the new marina-like housing that had sprung up over the former railway yard. 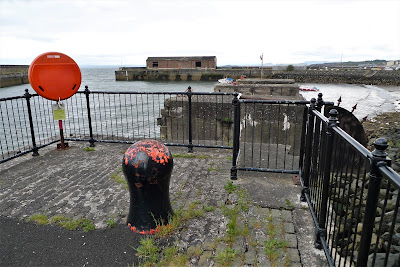 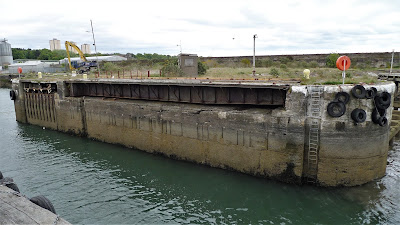 I leave you with the best view of Kirkaldy, the seafront. They could add palm trees, rum bars and beach umbrellas; but the wet sand, seaweedy concrete blocks and lowering sky make un unforgettable picture on their own. 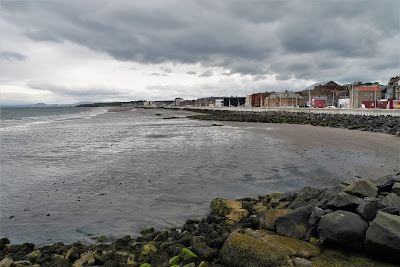