The second of my 'Taunton' posts.

It had been an unpleasantly chilly day when I last visited Taunton in November 2011, and it's a telling thing that I kept only one photo of my time there, of which a little more anon. Basically I wandered down the main shopping street, checking out the shops (without being very impressed), going as far as the old bridge over the River Tone, then returning via back streets that led me past a big old church, then, shivering, back to the car park. I know I took a few snaps with my camera - it was actually the little Leica, then only two years old - but none of these wintry snaps survive. The light must have been terrible, for me to delete them all. But then I'd written off Taunton as a place blighted by unimaginative, tired, post-war rebuilding, that had lost most of its older and more interesting buildings in Luftwaffe fly-byes. I hadn't discovered some of the nicer parts, such as Vivary Park.

One bright (and warm) spot I found was the quite large Debenhams department store. I bought a beige snood there, which I instantly wrapped around my neck once out in the cold again. (It's long gone now, but at the time it met an urgent need)

The store was very busy. Clearly the locals made a beeline for it every time they visited the town centre, just the same as any other Debenhams I knew. There were a lot of Debenhams stores around, in every large town. They were often the 'anchor store' in a shopping centre, the big one that drew the customers in. And at the time, back in 2011 - and indeed for many years before - I had always made a point of going in, often buying something while there. (I really spent too much, too often, on these visits) At the very least, I'd have coffee and a cake, sometimes a late cooked breakfast or a more substantial cooked lunch, and most certainly tea and cake in the afternoon. Debenhams was a reliable place for a pit-stop. It wasn't fancy, as John Lewis might be, but it was perfectly acceptable, and I always enjoyed dropping in for some refreshment. In Sussex, I could do that at the Debenhams stores in Brighton, Crawley, Worthing, Eastbourne and Hastings. Plenty of choice.

And in fact there were few places in the entire country where a Debenhams store couldn't be found. Their main direct rival was the House of Fraser store chain. In big towns and cities you might well find both. Some towns had a posh local department store not worth competing against, like Fenwick in Tunbridge Wells and Canterbury, or a one-off like Fields in Sidmouth, Goulds in Dorchester, Banbury's in Barnstaple, or Ely's in Wimbledon. These smaller local family businesses offered a different selection of goods, and a different atmosphere. They kept Debenhams out. But it was usual to find a Debenhams in most large places, either in a prime spot in the town centre or on a recently-built retail park.

Debenhams probably had upmarket ambitions, and may well have aspired to the elevated heights of John Lewis, or at least to emulate the particular appeal of Marks & Spencer. But the better-focused and superior John Lewis, and the super-reliable M&S (seemingly on every High Street, like W H Smith and Boots), were both beyond challenge. Debenhams knew its place. It remained ubiquitous but middle-market, a useful place to shop and stop for everyone, myself included.

Here's the one picture I kept from that previous visit to Taunton in 2011 - a roast chicken lunch at Debenhams, with the gravy boat on the upper right edge of the shot. 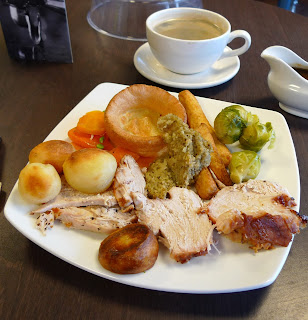 It wasn't bad at all - just the job on a cold day, when hunger rips at your vitals. My Money Diary spreadsheet for 2011 tells me that this feast cost £8.99, compared to £20.00 for the snood. (MD also tells me that I looked in at Bridgwater, on my way back to where I was pitched at Cheddar. Bridgwater was another riverside town that looked unprepossessing on a cold, dull day. The main excitement was an emergency repair to a section of damaged riverbank right in the town centre. It was a crowd-puller, but the blocked-off roads were causing traffic chaos)
It was going to be a nostalgic return to Debenhams this time around, in 2021. But I didn't expect to find it actually still open for business. I thought all Debenhams stores had shut down by now.
The retailer had lost its way. After various store closures from 2018, it had gone into administration in 2019, then again in 2020, lately being bought by Boohoo for online-only trading. So every remaining Debenhams store would be closed, and the chain would disappear from the High Street, like so many other well-known names before it - a victim of changing shopping habits, and of not foreseeing those changes. The same old formula, the same dependable but unexciting offering, didn't succeed well enough in 2021. Being an institution, a nationally-known brand, never protects you from business failure.
But this store was still open, even if it was clearly in the final days of its closing-down sale. 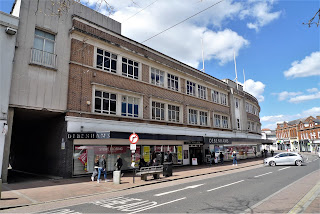 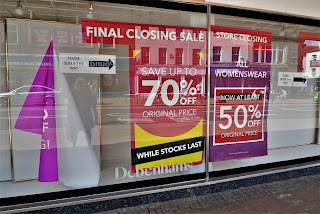 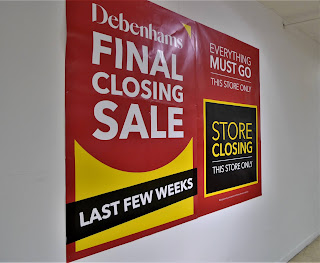 I went inside. The ground-floor section where I'd bought my snood in 2011 still had stock on display, but at truly knockdown prices. I went up to the first floor. Plenty of women's clothing still there. But I was more interested in the household items on the second floor. I toyed with buying a cushion, or a couple of new pillows, but didn't. The best had gone, and although there were shoppers throughout the store, and it didn't yet have a 'ghost town' atmosphere, with tumbleweed blowing about, I could see that even 70% off wasn't going to shift everything that was left. But I did pick up half a dozen free clothes hangers. 'Help yourself' the notices said. I did. 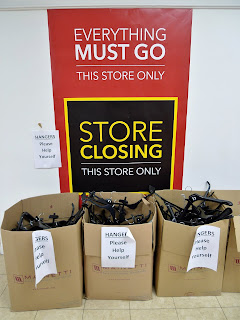 Parts of each floor were closed off, with redundant display shelving, clothes rails, boxes and other things stacked behind the barrier tape. That struck a sad note. 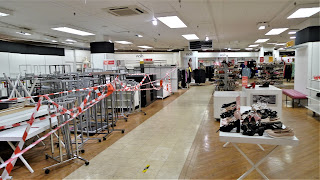 I found the restaurant where, in busy 2011, I'd had that roast chicken dinner. All closed up now, never to serve meals again. 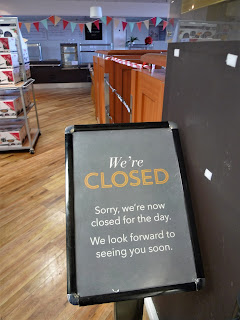 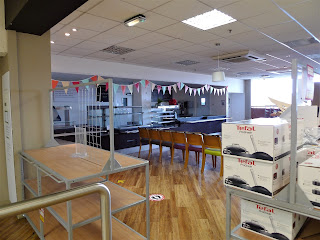 Then I saw a section that in happier times might have housed the bridal outfits or lingerie. It was taped off, so one couldn't get a close look. And at the back, a host of nude dummies. Stripped of their display clothing, they looked like pale refugees awaiting their fate, milling around and determined to party while they could - and never mind the risk of infection from the virus. No social distancing here! Most reprehensible. Still, in their position, you could hardly blame them. It's very difficult for an out-of-work dummy to find another department store job. So they were making the best of it. Frozen in the act of having a last fling. No doubt if I looked away, the movement and chatter and clinking of glasses would begin all over again. 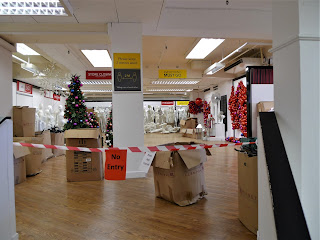 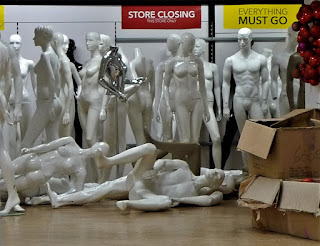 I used the little Leica's modest telephoto abilities to see more clearly what these dummies were up to. Some were writhing on the floor, obviously drunk. Others were flaunting their nudity without restraint. Dear me! Look at that female dummy (right centre), eyeing up that male dummy's six-pack - or possibly his groinal bulge? Goodness knows what might happen if I let them be! But then, why should I spoil their last-moment-before-the-giant-comet-hits-the-planet fun? I'm not that mean. I walked on. Faint sounds of music and laughter recommenced.
I've remarked before how dummies seem to have an inner life of their own. At times like this, when the chips are down, and the clothes are off, you see their Other Side.
One other thing I noticed: Debenhams had kept all the lights on, even in the closed-down and taped-off areas. This was psychologically good. It helped to keep the store looking like a going concern, merely having a final sale.
On this year's perambulations around the town, I came across this office complex: 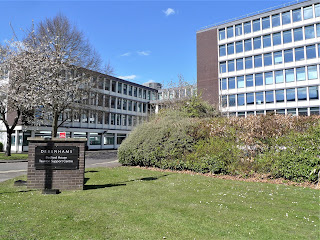 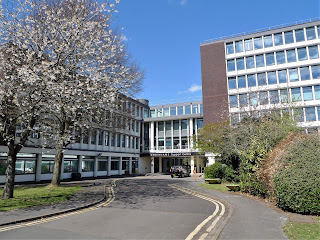 It was the Debenhams Support Centre - presumably their regional HQ for all the stores in the South West. It looked in good condition, still properly maintained, but no doubt most of the many staff who had worked there had already lost their jobs. Hundreds of personal career tragedies. Some of them would have been plunged into grave financial difficulties. All because Debenhams hadn't proved nimble enough to survive, hadn't had a good enough crystal ball, and had racked up a burden of debt based on false hopes of growth.
I remembered how I used to long for early retirement. But it was never likely that a trained and middling-senior investigation officer in the government's main money-raising department would be discarded. Income Tax and Corporation Tax weren't likely to be abolished! So I never experienced the pain and upset of being made redundant. Nor the realities of having to find another job in a shrinking sector.
Even though I was on holiday, I thought of those ex-Debenhams employees. Who would have thought that a chain of department stores like that could ever vanish, that so many would be plunged into unemployment, and their futures made uncertain?
And how the High Street has changed in recent years! It's too soon to say who will be left. My guess is that John Lewis and M&S will eventually be the only old-time stores left. And then only in the most viable locations. Probably bad news if you want to visit one close by, unless you are very fortunate. But then, good news for the smaller and possibly better-loved department stores, the local ones with individuality and that truly personal touch, who will now have a better chance.
Posted by Lucy Melford at 09:36