Three cars to get you noticed

I may extol the virtues and personality of my Volvo XC60, but I do realise that the name 'Volvo' will forever signify something rather boring to a whole section of the population. Which is of course coded language for 'most men'.

I also believe that, on the whole, modern Volvos appeal strongly to women, who like their comfort, solidity, carrying-capacity, and the feeling of security that they give. Well, that was true in my own case, anyway!

Perhaps I'm maligning car-owning men as a class, but I sense that for many of them image, handling and performance matter more than comfort and safety. And despite the current trend for Volvo to go upmarket and sporty, to challenge The Premium German Carmakers - let's not name names - I don't think that Volvo's Worthy But Slightly Dull image will disappear very soon from the minds of red-blooded men.

Who cares? I love my car. And she loves me. Despite the high expense of buying and running her, she has given me Very Good And Faithful Service for five and half years. We have a bond. We are sisters. I have wept for my car, whenever she has ever been damaged or in some way stricken. I really don't care if some Opinionated Know-all Self-important Male Person wants to pooh-pooh my chosen steed. Let him. A thunderbolt will strike him sooner or later.

All this said, I do respect other cars, and certainly hanker wistfully after a few, generally those that must forever be beyond my reach. They all have snags of one kind or another, of course, and not just the price. Practicality is the king of virtues, and they mostly lack that. But who, male or female, would not be seduced by some of the exotic cars that one might conceivably buy and drive? And they don't necessarily have to be Italian, though that helps. I'm always on the lookout for fancy chariots, and even though I remain steadfastly true to Fiona - not errant in either thought nor deed - I can still admire a four-wheeled creation of character and distinction.

What do I mean by 'character and distinction'? Well, these following photos of mine might give a clue. They are not all 'supercars', though some were in their heyday. Such as this vintage Alvis, seen in London in 2010: 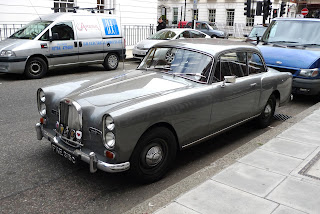 Or this DeLorean, seen in Winchester, also in 2010: 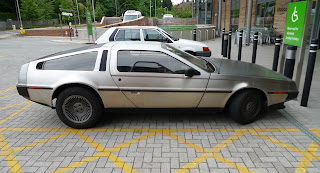 Or this Jaguar, seen at Chipping Campden on the Cotswolds in 2014: 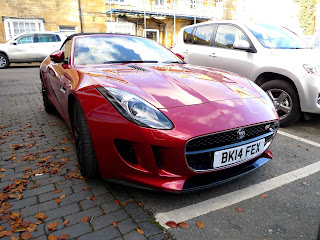 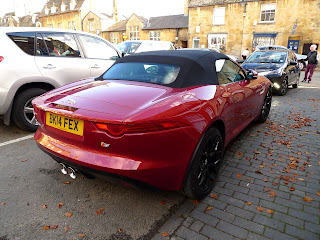 What a lovely red colour! What presence!

They don't have to be prestige cars - merely unusual in some way, such as this Nissan Figaro, parked on a drive near my village in 2014... 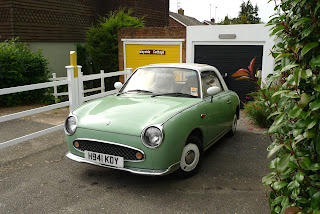 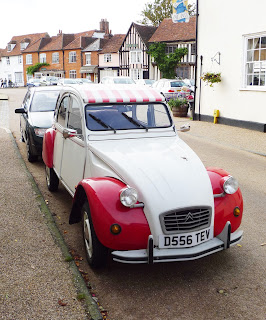 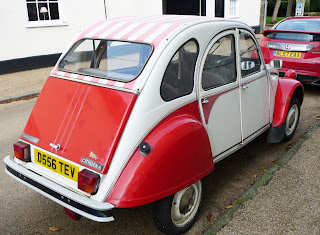 The French have always tended to make quirky cars, even though some recent models are tediously boring - such as this Citroën that I saw at Bideford in North Devon in 2013 - redeemed, however, by its Gallic-seeming plate (it's actually an Irish registration): 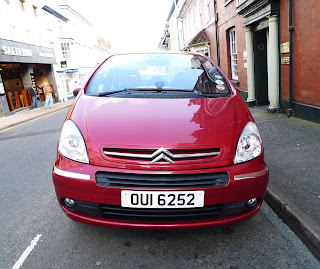 But the British can also make uninspiring motors. Consider this Rover Stirling, seen at Seaford on the Sussex coast in 1992: 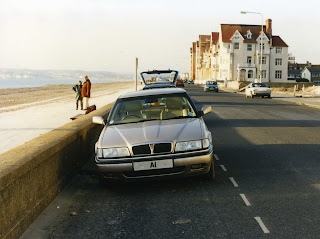 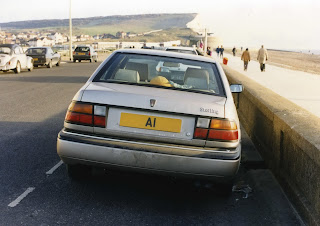 Again, it's redeemed by its amazing number plate. And what a number! A1, no less, which was the first-ever registration issued in Britain, to the second Earl Russell by the London County Council way back in 1903. I was extraordinarily lucky to see it. This plate must have graced a long succession of cars, but this Rover wasn't worthy of the honour in my opinion. My books of reference tell me that it changed hands for as much as £2,500 in 1959 (that's well over £50,000 in today's money), and by now - with the superheated market for rare plates being what it is - it must be almost beyond price. Well, let's say you might do a deal for five million pounds.

I'm sorry to say that F1 ONA (which 'spells' FIONA) is also out of my price range. That too went for a small fortune some years back.

Anyway - would you believe it! - I encountered three cars of 'character and distinction' on New Year's Day. The first was parked on the quayside at Ramsgate harbour. It was a 1967 Chevrolet Impala SS: 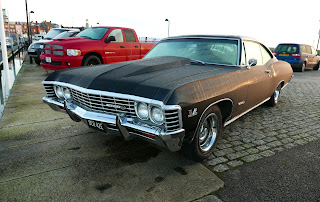 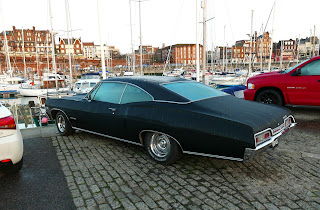 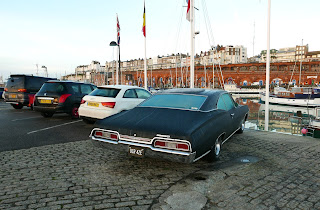 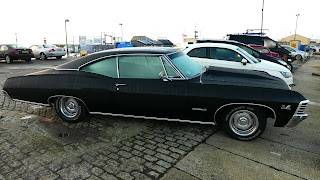 Try parking that at Tesco! Eye-catching, though. Next up, a Citroën DS from 1973, looking like a sophisticated manta ray on wheels, as seen parked behind Bleak House at Broadstairs: 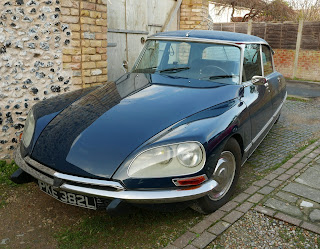 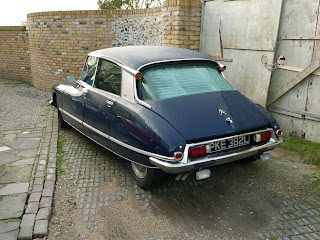 My Dad had one of these, in red and white, seen here in this 1975 shot of my then-teenage brother Wayne holding a kite: 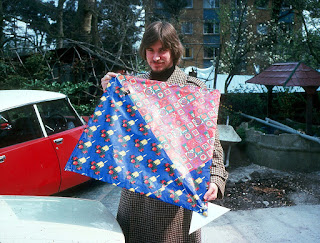 And as seen in these other 1975 shots, taken in Newport, South Wales: 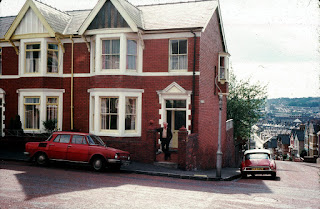 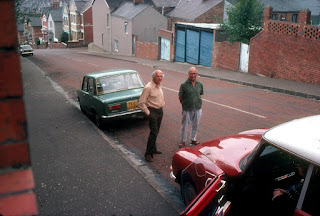 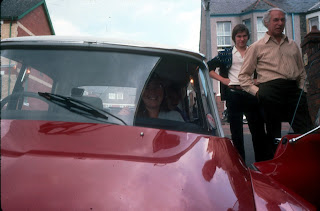 Dad's in the beige shirt and dark trousers. Uncle Laurie is in the green shirt and light trousers. My cousin Sylvia is seated in Dad's car, and my brother Wayne is standing behind dad in the bottom shot. It was a difficult car to drive, unless you had learned its ways. It had a steering-column manual-gearchange, and a hyper-sensitive footbrake which wasn't a pedal, but a button on the floor. You also couldn't just get in and drive off. You had to wait for the hydraulic suspension to lift the body off the wheels. French quirkiness at its very finest! Even so, the ride was superb, the acceleration quiet and exhilarating, the seats offered armchair comfort, and the interior footroom was limousine-like. A pity it was so unreliable!

My third New Year's Day car was outside the famous Walpole Bay Hotel in Cliftonville. 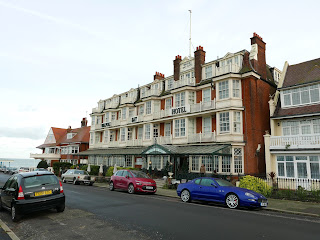 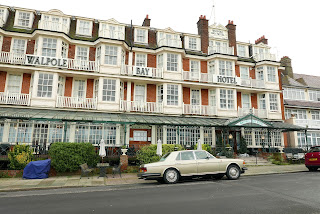 This hotel offers Edwardian standards and Edwardian decor to people who love nostalgia and are prepared to pay for it. See http://www.walpolebayhotel.co.uk/. It's an institution. I parked Fiona and had a closer look. I didn't actually go further than the front entrance, as there seemed to be a wedding reception or something similar going on. I hovered, pretended to be reading local tourist brochures. Then I took a nonchalant stroll past the blue car. It was a little Bugatti. 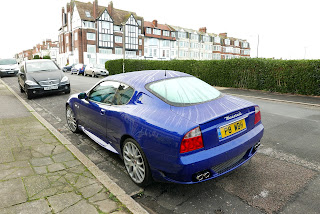 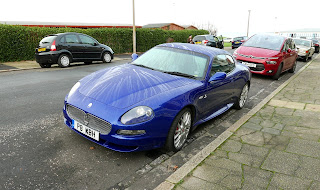 Now isn't that a neat-looking little car? It must surely have been the baby of Bugatti's model range. I didn't know enough about Bugattis to say which model it actually was. Nor could I decide whether it was new or not - the plate was obviously inherited from an earlier car. I will simply say that if ever it becomes necessary for me to own a sports car, then this will do nicely. Whether I could get into it - or more to the point, get out of it again - is the particular snag I spoke about earlier, in connection with fancy chariots of character and distinction.  That, and the lack of carrying-capacity. Fatal defects. But I'm sure it would be fun to drive!
Posted by Lucy Melford at 22:19