I last had an eye test and new specs in October 2013. It was time for another test, and I knew that this would mean a new prescription, and very probably new varifocal lenses.

I was right. Both eyes had become a bit more long-sighted. Thankfully, the trend for my left eye to 'catch up' with my right (the left eye had been markedly short-sighted thirty years ago) had continued. Well! A couple more years of this, and I'll be able to use binoculars again without provoking a headache.

But longsightedness means that without glasses, everything close by is very indistinct - meaning out of focus. Reading is impossible unless I have my glasses on. Which means that I wear them all the time except when sleeping. They are part of my face, part of my personality - and are not at all an optional accessory, to be worn or left off at a whim. I therefore go for functional, robust, almost utilitarian specs that look fine and appropriate in any situation. That basically means thin unfussy metal frames, and not heavily-styled designer frames that make a fashion statement.

This time I couldn't have my existing frames again (which were in the style that Specsavers called 'Krissy') because they were no longer available. If I wanted to stay with simple gold metal frames, I'd have to go for their nearest current equivalent (called 'Raquel'). These were only slightly different, and certainly the helpful and interested girls at Specsavers decided that the 'Raquel' frames suited me the best of the three possible choices that I considered. Good enough. I paid my £243, and I went back to collect them two days ago, once my coughs and sneezes had subsided (I'd been suffering with a New Year cold for several days).

The 'Raquel' frames, though still oval, were a little larger than the 'Krissy' frames. This meant that I'd enjoy better peripheral vision. They were also less inclined to slip down my nose. The combined effect was to reveal more of my eyes. See what you think. Here I am, looking a bit windswept, wearing the new 'Raquel' frames outside Brighton Museum & Art Gallery, within minutes of leaving Specsavers: 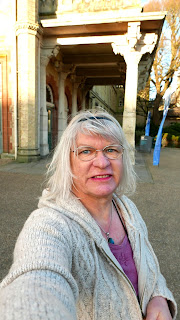 And here's myself wearing the old 'Krissy' frames a month ago in an Italian restaurant in Rochester: 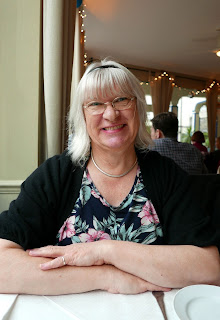 I do prefer people seeing more of my eyes, not less. We communicate so much with our eyes, and it's not good to have them obscured. That's one reason I don't often wear sunglasses. I don't want to hide. I want to be open and on display. It's a form of honesty. All too often the top edge of the 'Krissy' frames used to slide down almost to the level of my pupils, compromising that open look, so that I was frequently having to push then up again. Now, with my new 'Raquel' frames, I can be confident that my eyes will be much easier to see.

One of the choices I considered this time was 'Alice'. They were in fact my initial choice back in October 2013, and here I am at home at that time, trying to decide whether I really liked them: 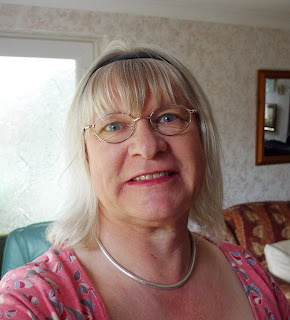 From the front, yes, they were all right; and they were comfortable; but they had fussy decoration on the nose bridge and side-arms that irritated me, and I wasn't sure whether the overall effect was quite what I wanted. Fortunately Specsavers let me change to the 'Krissy' frames, which were plainer but (I felt) suited my face better.

So far I haven't had any 'buyer regret' with the 'Raquel' frames, and I feel I will stick with them. They were only £45, which isn't much when you look at what opticians charge for 'designer' frames. I'm afraid those mostly suit young faces, or at least long thin faces! They don't look so nice on round, pudgy faces. I'm content. It saves me money, and sidelines worrying about what looks sharp and trendy.
Posted by Lucy Melford at 11:21