This is a sequel to my last post. The object in question - which destroyed a good tyre - is definitely worthy of a write-up. Here it is: 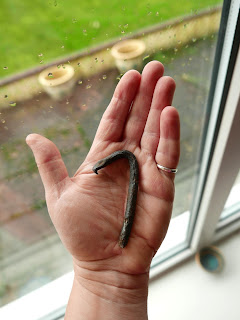 It somewhat resembles a very hefty iron fish hook, even to that vicious barb. And that's my left hand, so you can see how big it was. The tyre fitters had not seen such a beast for some time. It must have hooked itself onto my rear tyre, and then by degrees, as the wheel revolved, driven itself in as far as it could go - which was nearly all the way. It didn't make a simple round puncture, the repairable sort, but a misshapen hole, so that the shank of this thing didn't self-seal the wound but let air escape around it, leading to a very rapid (and potentially dangerous) deflation of the tyre.

Well, Fiona now has two very nice new rear tyres - very reassuring in this dreadfully wet winter weather! This incident can be placed in the past. But not forgotten: for some months to come I will be very wary of country lanes strewn with gravel and other debris after heavy rainfall!

Did fitting new tyres cure the humming noise at speed? No. It's still there. My ears tell me that the hum is definitely coming from the rear offside, into my right ear. So it could be something to do with the wheel back there on that side of the car, or whatever it's connected to.

The wheel bearings then? Except that the noise isn't a metallic drone, and it doesn't cut out or change if I steer sharply in a different direction (the standard test for worn wheel bearings). And it began 10,000 miles ago, in May 2015, without ever getting worse - dodgy wheel bearings would get rapidly louder prior to their inevitable disintegration: they wouldn't last so long as 10,000 miles. Apart from that, the Volvo dealer's sonic tests determined that there was nothing wrong with any of the wheel bearings.

The differential box is right in the centre of the rear underside. But my ears say the hum isn't coming from that direction. It's a sealed unit, in theory never requiring maintenance. And it isn't leaking any lubrication. Nor is it used only some of the time, as the rear differential on my previous car (the Honda) was. Twice in my ownership of the Honda, the rarely-used rear differential gummed up through under-use, and would creak on sharp bends. The Honda dealer fixed this with a 'differential flush', which I think just means fresh lubrication. But Fiona's rear differential is always-on, and can never 'gum up'. Apart from all that, the Volvo dealer's sonic tests didn't indicate anything wrong with the differential - and indeed I gather from my own Internet research that it's rare for that component to give any trouble at all on my car.

So it's all very mysterious. My concern is that an unexplained noise must indicate a problem of some kind. It might easily be trivial. Or it might be a sign of impending doom. I do take heart in the fact that the noise has never got worse, and that it's not so loud that I can't live with it.

I feel the practical and sensible thing to do is to await events. Certainly not to book Fiona in to have a new offside rear wheel bearing, simply to see whether, after all, it might do the trick. The job would cost at least £200 - too much to spend on a tentative notion that it might effect a cure for the hum.

I gather that even if they become noisy, rear differentials hardly ever fail. I hope that's true. It seems that installing a new one might cost £3,000. I'd put up with a lot of humming to avoid paying that!
Posted by Lucy Melford at 17:39