I rely quite heavily on public toilets when out and around. I keep myself amply hydrated, and find it expedient to go every two hours for maximum comfort - although of course if need be I can hold out for longer. But, on average, a toilet stop every couple of hours is normal for me.

I'm quite fastidious, and will turn my nose up at a loo that isn't in a nice state. Let's face it, a woman has to plonk her bottom directly onto a toilet seat that many other women and girls have sat on since that seat was last cleaned. We rely on each other to leave the seat as spick and span as we hoped to find it. And more often than not, that's how it is. I'm not frequently confronted by a wet toilet seat that some ignorant sluttish creature has dribbled onto, and then failed to wipe dry afterwards.

In any case, I reduce the possibility of a distasteful experience by choosing my comfort-stop with care. A ladies' toilet you pay to enter is always a better-than-average bet, as persons with slovenly or dirty habits tend to dislike paying for anything. Mind you, an entirely free public toilet can still be a clean and pleasant place; although too often I hear users come in, do their business, then leave with nary a sound of running water and a blast of air. Ugh. Makes you want to open the exit door with rubber gloves.

Public toilets are not social clubs, and I wouldn't expect to have the kind of woman-to-woman exchanges you might occasionally get in pub or restaurant toilets, when touching up lipstick, or brushing hair. But even so, ladies' loos, in public spaces or on private premises, in superstores or hotels, all have the status of being female-only places where (cleaners apart) men must not go. It's a thing that women rely on. Whatever the reason for entering a toilet - not always to have a pee - a woman knows that if she doesn't necessarily have the place to herself, she will at any rate be sharing it with fellow females who know and understand, and will be on her side. It's a sanctuary. It's a place to cry; to calm down in; to grab a few moments to think; to consider some next step; a place to repair both face and feelings.

Indeed, I'd say that this sanctuary function is as important as any other. And I don't think it's recognised by men on council committees. If they did recognise it, they wouldn't be so assiduous in replacing traditional men's and ladies' toilets with blocks of unisex loos that both sexes share.

This post isn't about the question of unisex toilets for non-binary individuals. I'm quite out of touch with what might be going on in that area. I do nevertheless have a point of view on it. I think non-binary people deserve consideration, but I still want well-defined and recognisable women's spaces. I'd be doubtful about a non-binary person supporting my preference for traditional ladies' toilets, or to agree that preserving their sanctuary function is important. But I'd hope that such a person would see why it matters to me.

Likewise, this post isn't about whether transgender women should be allowed to enter a ladies' toilet. Again, I'm not up to speed on this, and I haven't been following the pro and con arguments. But I do have a personal view, which is that all persons who look like women, and behave like women, and have a woman's outlook and social situation, and live a woman's life, should without question be able to use a ladies' toilet.

Back to my main theme. Let me relate an experience I had in Plymouth last month. I'd explored the waterfront, starting at Sutton Harbour and the Barbican, and was working my way past the Citadel and the Hoe, and on towards Millbay. By then I was looking for a loo. A modern-looking bock of toilets appeared, set in a small park. Hmm. Unisex. And 20p was needed to enter one of the individual toilets. I tried to guess which of them might be the nicest to use. Choice made, did I have a 20p coin? I hardly ever used coins, but there was one - and only one - in my purse. I dropped it in the slot and went in, locking the door behind me.

My heart sank. Some man had left his urine all over the toilet seat and the floor in front. How disgusting. Oh well, let's mop it all up and make the best of it. But there was no toilet paper: the dispenser was empty. This really was bad. Well, I wasn't even going to attempt to stand in a pool of urine while hovering above the seat. I unlocked the door and stepped out. A woman was waiting outside, clearly eager to go in after me. I warned her what to expect. She still went in.

What to do now? I had no more coins. Then I saw that there were two sides to the block. Ah, that was interesting. One side was for people paying with coins. The other side was for contactless payment. And this side, the contactless-payment side, looked distinctly less used. I wondered why: surely most people had credit or debit cards, or could pay using a phone app? Well, evidently not. 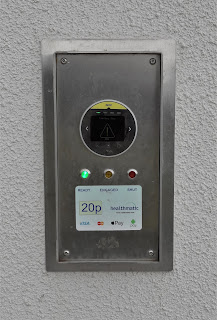 I thought: this must be the smallest amount I've yet paid using my phone - only 20p!
Inside, it was as if freshly cleaned. It smelled nice. No man with a drippy willy had been in here! I sat down with confidence. Reams of toilet paper! I took my time. Those who still used coins were queuing on the other side of the block for a third-rate pee. I was on this side, the side of the future, and having a luxury pee.
When I came out, I saw people looking at the contactless payment pads on this and the other doors with puzzlement, as if they couldn't believe their eyes. All eyes then looked at me, as I emerged. I felt like saying 'It's great in there, give it a go' but I knew they wouldn't know how to open the door without a coin, so I just smiled. Truly, the world is now split between the High-Techs and the No-Techs.
It struck me that I'd never before seen a public loo that needed a contactless payment to enter it. So this was a significant historical event.
Posted by Lucy Melford at 22:56