Snake in the grass

I'm not quite sure how I feel about snakes. Some of them must be nice to know. But many others are clearly not, approaching life with an over-defensive attitude that involves striking and biting, and a desire to swallow one whole.

In Great Britain - I am excluding Ireland of course - there are two snakes one might see on tramps in the countryside. The adder and the grass snake. I've come across an adder more than once. I've even managed to get some pictures, as in these August 2005 shots of two adders on the South Downs at Bignor Hill, who stuck around long enough to pose. Then, sated with my company, they both exited into the undergrowth. 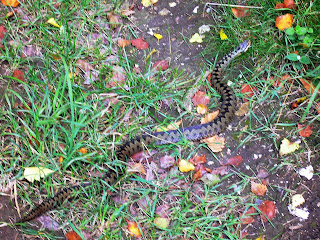 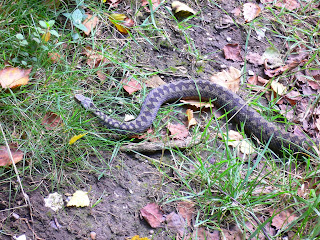 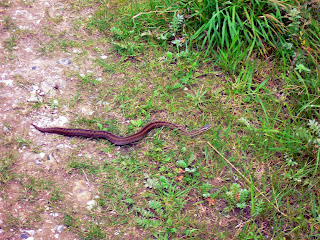 The adder, with that diamond-pattern along its length, is unmistakeable. This is Great Britain's only poisonous snake. The only one that Cleopatra - Queen of Egypt, lover of Julius Caesar and Mark Anthony, and lately feeling life's pressures - could, if stuck in Sussex, accept as a stand-in for a proper asp (her suicide snake of choice).
The adder will normally detect your approach and hide. But occasionally it's caught unawares and must decide what to do - or rather, its instincts decide - although that always involves instant flight, unless you tread on the adder, or deliberately provoke it. I suppose these two on Bignor Hill were preoccupied by some distracting activity they were reluctant to abandon, such as sex.
An adder-bite is a possibility, though unlikely. Even so, I wouldn't risk walking along a grassy country path in summer with naked feet, nor any exposed flesh below the knee that a startled adder could sink its fangs into. I believe the best course, if bitten, is to fire up your GPS, check your location, and stay put while you make an emergency call. Immobilisation slows down the spread of venom through one's body. (Correct me if I'm wrong, as this is a matter to be taken seriously, even in Great Britain) I don't think many people have died from adder bites down the years, but it pays to look where you're going, and not disturb these creatures.
I'd never in my life seen a grass snake - until yesterday. I was in the churchyard at West Grinstead, a hamlet north-west of Partridge Green. And there it was. It had made a kind of nest for itself, and was curled up, enjoying a nap. I had Lili with me, and we snuck up on it nice and easy. 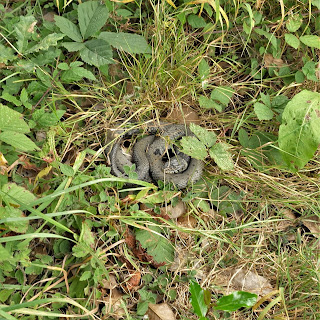 Just as in book illustrations! Green-brown, with light patches on the head, and no diamond pattern. Fatter than an adder would be. I got Lili focussed, pressed the shutter button, and silently took that shot just above.
But I was already too late. The grass snake had woken up and was tensed for a retreat. If you click on the shot to enlarge it, you can see some blur in the snake, even though the surrounding vegetation is sharp. Next moment, it uncoiled, and slithered away from me into longer grass.
Well, that was certainly a brief encounter! But at least I had a pictorial souvenir I could keep forever. And it's nice to know that Lili can shoot wildlife. Take me to Africa at once!
I'll be on the lookout for grass snakes now. They aren't poisonous, and not especially rare, but they must be very shy. However, country churchyards are clearly good places to find them.
Posted by Lucy Melford at 08:52