It's well-known that I don't like buses, modern ones anyway, and vastly prefer to drive my own car, or else go by train, or walk. I don't even have a bus pass, although I qualified for one several years ago, back in 2014, when my State Pension began. I must be almost the only pensioner in the country who spurns this feebie.

This said, I used to like the old-fashioned kind of double-decker bus with an open platform at the back, the sort you could hop onto, and jump off from. Those buses, which I used when at school, and afterwards until 1973 (when I passed my driving test) had character and were fun: they were proper buses. They were basic in their comforts, and probably fell well short in the safety department, but they were airy, they had cheeky chappies for conductors, and offered certain views out denied to the rider of buses in 2021.

Nowadays I do, very occasionally, have to use a bus. It's so occasional, that each time I step aboard something has changed. It could be the procedure for buying a ticket from the driver, or some restriction on where I can stand, or sit. But it always strikes me that - since the last time I used a bus - things have advanced a notch or two. Modern buses now resemble long-distance coaches in their comfort and facilities. So much so, it's a wonder that they are not thronged with switched-on people wanting to ride in some style, charging up their phones, and connected with sizzling onboard Wi-Fi.

As it is, the passengers are always fewer than you might expect, and seem restricted to students, mums with buggies, and wheezing oldies of both sexes. I suspect that some of these doddery pensioners spend a lot of time riding around for free, their bus pass being their passport to another exciting Odyssey. Yes, I sneer. But I'd have to join their ranks if ever I lost the ability to drive, and no trains were handy. Not a pleasant thought.

A vintage bus would be different. I'd use one of them.

Three days ago, I had the chance to board just such an old-style bus. It was originally from Merseyside, but looked very similar to the buses I rode when at school in Southampton, during the 1960s. It was red and white, whereas the Southampton Corporation buses were red and cream, and had the distinctive Corporation coat of arms on the side. But nevertheless very much the same. So a real trip down memory lane! I may have hated school, but the bus ride there and back was always something I looked forward to.

The bus was parked outside Dunster station on the West Somerset Railway, one of the West Country's preserved railway lines. It belonged to the Railway, and shuttled between Dunster and Minehead as an alternative to taking the steam train. I suppose you'd have the option to travel from Minehead to Dunster by train, and return on this bus - or vice versa. 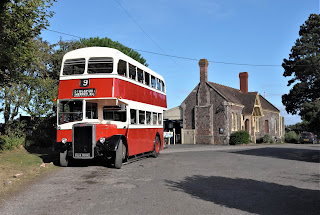 I had a look at the station first. A late-afternoon steam-hauled departure to Bishops Lydeard via Watchet and Stogumber and was imminent. I saw that off. There was also a diesel shunter making various manoeuvres. All presented to me by chance, by indulgent gods, as I hadn't known in advance what I might see. I was merely in the area, and had turned up casually, almost on a whim.
The train show over, it was now the turn of the bus. I had it to myself. There were no 'keep off' signs. Right! Let me step aboard. 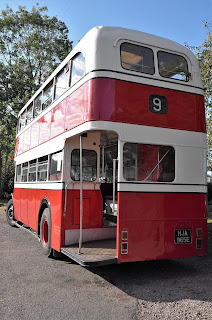 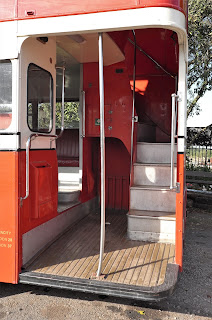 That was the platform nimble people could hop onto, or jump off, even when the bus was moving. The upright chrome rails and handles helped. I never saw anybody misjudge things and end up sprawled in the road. One learned when young how to leap with skill and aplomb. Of course, those not so acrobatic waited until the bus came to a halt. By the stairs (and behind them ) was space for big parcels, heavy shopping bags, and collapsible prams. I don't think buggies were around until the 1970s. The conductor, with his ticket machine that dispensed several different types of ticket torn from coloured paper rolls, stood by the stairs, and must have got a lot of daily exercise, running between the decks during his shift. He certainly never sat down.
Now am I right in remembering that he carried a metal case onto the bus at the start of his shift, which contained a fresh ticket machine and spare rolls of tickets, and that he secured this inside the locker above the space for prams and parcels? (I won't insist on it)
Full of nostalgia, and thinking much of my Southampton days - when for several years the fare from school to home was 4d (a yellow ticket) - I looked around the lower deck. 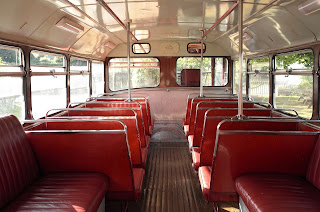 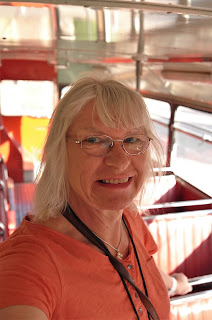 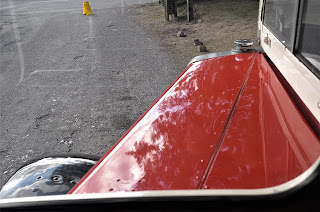 That's a view - forward, over the engine - that you can't have in modern buses!
And next to it, a view of the driver at his huge steering wheel, in a cab inaccessible from inside the bus. It looks a bit utilitarian. I'm guessing no power steering... 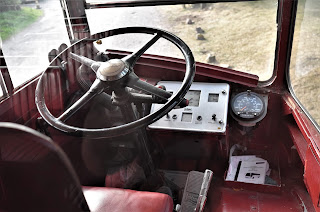 Some drivers, rather meanly, might roll down a privacy blind with press studs. But then they couldn't see what was happening inside the bus, nor exchange hand signals with the conductor. 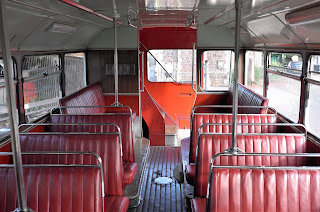 The passengers had windows they could open. In winter, of course, those windows stayed shut, and everything steamed up. You'd constantly be wiping the glass with your fingers, in an attempt to see where you were. The bell-pushes were few and sometimes out of reach, so it was necessary to rise from one's seat as one's stop approached, and then push through those standing, so that the conductor would know that you wanted to get off. More often than not, he would ring the bell. I don't recall ever being allowed to do it when very young.
Let's go upstairs! 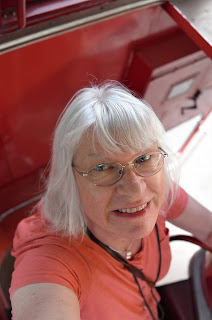 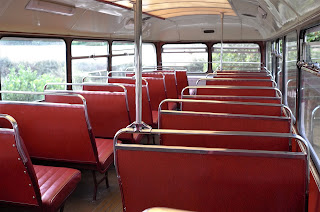 Young children would always fly to the front seats, from which the forward view was wonderful. (It's a view still obtainable in modern buses, I will grant that) Teenagers would instead collar the rear seat. I think they still do. 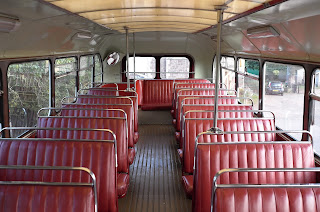 Note the mirror at the rear, so that the conductor could keep an eye on whatever might be going on upstairs. I dare say that teenage antics in the rear seat often gave him cause to pop up and say something.
Rising from one's seat on the upper deck, and making one's way to the stairs, then bucketing down the stairs, was always a tricky proposition while the bus was moving, especially if swooping around a bend. But I never fell to my death, nor did anyone else. You developed a Tarzan-like expertise at holding on. 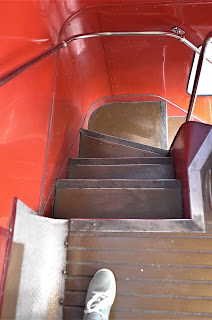 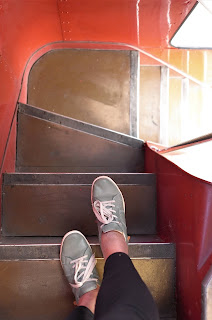 A family was approaching, so I got off to give them a clear run, and studied the front end of the bus. 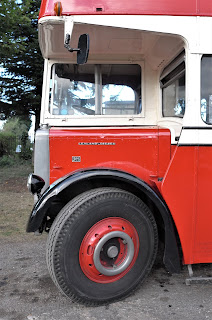 The driver had a pretty good view out, in three directions, and had only to slide open a window to talk to a passenger waiting at a bus stop - or to the dreaded Inspector. The engine wasn't especially accessible. Buses did break down now and then while on their route, and the driver might do some basic fiddling while the conductor took out one of the rear bench seats and stood it on end at the back of the bus, so that other drivers could understand that the bus was out of action and going nowhere. Everyone knew what a bench seat on display meant. 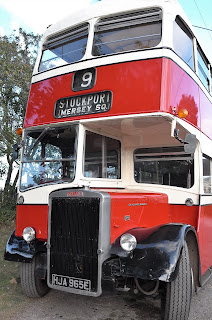 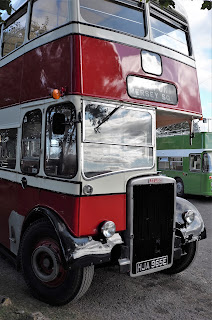 Just as I was never interested in train locomotives - only the social history and architectural side of railways - I was never a bus enthusiast. It was a boy thing anyway. So I can't say much about the make and model of this bus, only that it's obviously manufactured by Leyland (the badges say so).
But such details don't matter. It's a handsome vehicle, beautifully cared for, and wonderfully evocative of the 1960s. Its registration - HJA 965E - tells me that it was first registered in Stockport in the first half of 1967. Wow, the year of hippies in California, and Flower Power. And Engelbert Humperdinck was in the charts. And Sgt. Pepper's Lonely Hearts Club Band was the Beatles' album to be seen with.
Lucy in the Sky with Diamonds, and all that...
Photos courtesy of Lili, my Leica X-U. I think I've finally got the white balance sorted, so that Lili's tendency to too much yellow in her rendition (suitable for underwater usage, but not otherwise wanted) has been counteracted. All colours are in balance now, at least to my eyes.
Posted by Lucy Melford at 13:22