Yanworth is a small Cotswold village. It has two reminders of death.
The first is the Hangman's Stone. This lies by a track to the north-east of the village, in a rather isolated spot. It's a long thin stone slab, not very large, apparently natural except for a slot carved into it. I first saw it in 2012, when it looked like this: 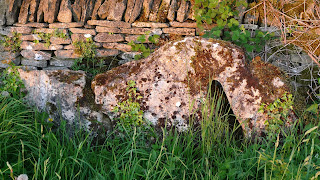 I went back to see it again while pitched at Burford. It hadn't changed, but the grass was shorter and more of the stone could be seen. 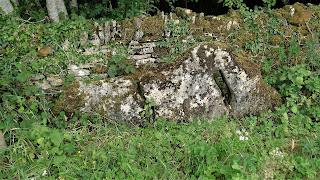 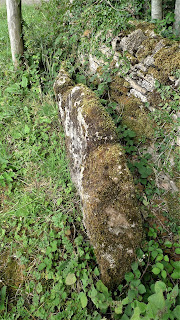 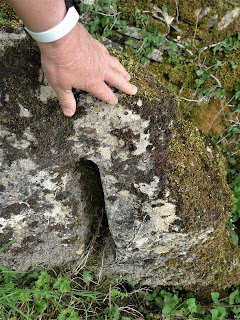 I know of another Hangman's Stone. It's by the side of the A3052 road near Branscombe in south-east Devon, close to where the B3174 joins from Beer. Here it is, in two 2017 pictures: 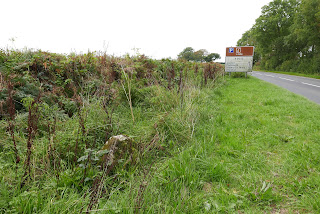 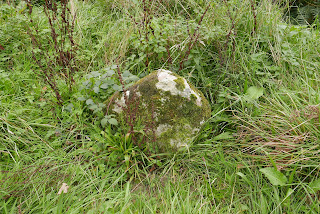 It's even smaller than the Yanworth stone, and has no slot.
The question arises, why are these called 'hangman's stones'? If they really were used in some way to hang felons, why are they so small - and recumbent? And why does the Yanworth stone have that slot in it? Of course, it may be that all we see now are fragments of what was once a much larger - and upright - monolith. When wandering around Burford during my first evening I saw a stone shaped to function as a set of steps for mounting a horse: 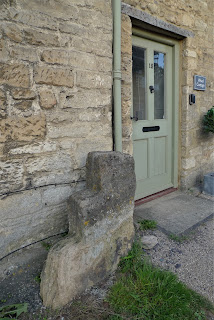 Now such a thing would be much better as a Hangman's Stone. It has some height. Probably not enough, but certainly more than the Hangman's Stones at Yanworth and Branscombe.
The condemned person has to be able to 'drop'. If there is a sufficient drop, as there used to be on a properly-constructed scaffold, then releasing the trapdoor mechanism will let the body fall freely, and the jerk when the rope abruptly stops this fall should be enough to snap the person's neck, instantly killing him or her. Apparently the Official Hangman up to 1956, Albert Pierrepoint, was expert in calculating how much drop was needed to snap a neck, given the condemned person's height and weight. Too much drop, and the head might be wrenched off. Too little, and the neck wouldn't be broken - the condemned person would just dangle there choking to death. As must have happened with most rough lynchings in the past, where the victim was hauled upwards by a rope thrown over a tree branch, and then left to die slowly by strangulation. As indeed happens nowadays, when despairing people string themselves up in prison cells.
I'm suggesting then that the two modern Hangman's Stones at Yanworth and Branscombe might in each case be all that remain of a stepped monolith that has been knocked to pieces since its last serious use. As well might be. Plenty of local people would want to see such a grisly relic of grim justice destroyed so that it couldn't be used again. In its heyday it would have stood next to a regular gibbet, like this one I saw near Elsdon in Northumberland in 2018: 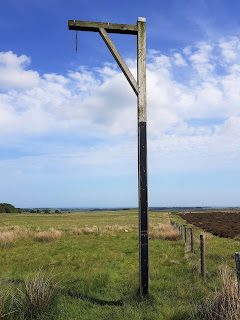 It all hangs together. Except that (a) there is no stone at the Elsdon gibbet, and (b) I haven't explained the purpose of that slot in the stone at Yanworth. In any case, why was a specially-shaped stone needed at all? Couldn't the condemned person just be made to mount some tall wooden steps - neck in noose - and the said wooden steps then kicked away? It's all rather a mystery.
Yanworth also has an entirely different relic of historic death inside its church, which is set apart from the modern village. A guide inside the church explains that during the terrible Black Death of 1349 most of the village existing at that time was pulled down and set alight, in a frantic effort to contain the spread of the plague. Only the most important buildings, such as the parish church, escaped destruction. The rebuilt village now stands at a little distance, and only farm buildings are close by. It's a peaceful spot now. In the churchyard are the graves of the local landowners, the Vestey family, famous for their butchery business.
Inside the church, on a pillar, is the stone face of a woman with eyes puffy from far too much crying. It seems to be a primitive and naïve work at first glance, but actually it's quite subtle, as the expression on the woman's face changes as you view it from different angles. But none of the expressions are benign. This is a woman facing dire hardship. She has lost her man and her children, and bitterly resents the injustice of it all. She is aggrieved with her God. But in the end, she is simply forlorn and lost, with nothing now to live for. Rather different from the celebratory carvings and other images one generally finds in a church, that offer hope. There is no hope in this face, only raw grief and anger. 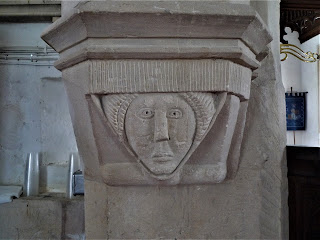 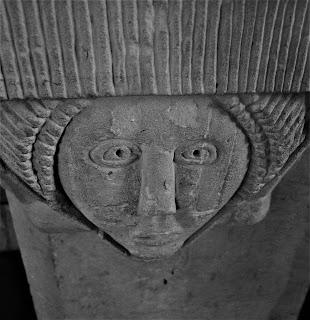 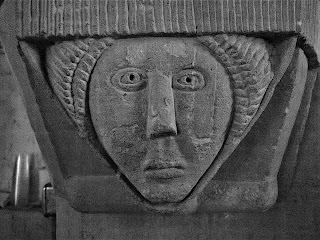 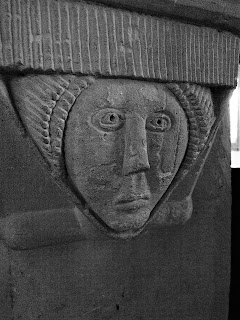 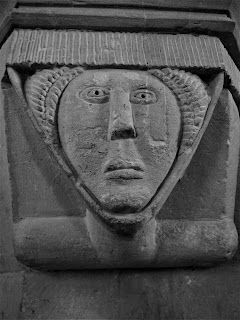