Have you ever cast your own horoscope? Properly, I mean, using Ephemeris Tables and doing all those calculations, afterwards drawing up a chart showing the precise positions of the sun, moon and significant planets at the time of your birth?

First let me say that my attitude to astrology is one of scepticism. It seems unlikely to me that the various masses moving around the Solar System - chiefly the planets in their orbits around the sun - can have a profound effect on the character and destiny of an individual person here on Earth.

I do see that there must be a tiny gravitational effect, in that as the sun, moon, and all the planets move about, we are pulled this way and that by minute tidal forces. My money is on the moon having much the greatest effect, and the rest not much at all. But perhaps all of these bodies, acting in combination, do exert sufficient tidal forces at a molecular level to affect the development of a human embryo inside the womb. And it's obvious that the aggregate tidal effect varies from moment to moment: so a horoscope for ten o'clock in the morning will be different to one for five minutes later, when the sun, moon and planets, will have moved on a bit.

So far, so good. Gravitational attraction, be it ever so small, could have nudged my embryonic cells and their contents slightly, so that there was a tendency for me to develop in this way, rather than in that.

I don't however see how this translates into a system for making assertions about character, and detailed predictions about what will happen to me. A system, moreover, than was devised centuries ago, well before there was any concept of the real forces that masses exert upon each other. Astrology is pre-science, full of magic numbers, and appeals to everyone's primitive desire to impose order on chaos, explain the differences between individuals, account for what has already been, and to reveal what is yet to be.

So why did I cast my own horoscope back in 1970, just as I was leaving school? And how did I know how to?

It was my younger brother Wayne. He had become deeply interested in Greek myths and from there to mysticism and religions generally. It fired his imagination. Mum and Dad treated all this with amused tolerance. They were anything but mystical and religious. I stayed neutral. I could see plenty of interest in what Wayne was looking into. But it didn't appeal strongly to me.

Then a new monthly magazine was published, called Man, Myth and Magic. Wayne got Mum and Dad to buy it for him. It was glossy, serious, and well-produced. I dipped into it and was impressed. If I remember correctly, there were properly learned but easily-read articles on such things as the history of witchcraft, and indeed all aspects of the occult. It built up into a fully-illustrated encyclopedia - see https://en.wikipedia.org/wiki/Man,_Myth_%26_Magic_(encyclopedia). I don't think it would turn you to devil-worship, but Wayne was only in his mid-teens, and unlike me was obsessive about whatever took his imagination. So I'm sure Mum and Dad were keeping a close eye on what this magazine was going to cover, and were poised to pull the plug if necessary. It was potentially dangerous and distracting stuff for a youngster who needed to keep his attention on his O- and A-levels. They must have thought me old enough, and too sensible, to be ensnared by the magazine's baleful influence!

In one of the early editions there was a pull-out guide to horoscopes and how to cast them. I ended up possessing this, and found it in my attic the other day. Click on any image to enlarge it. 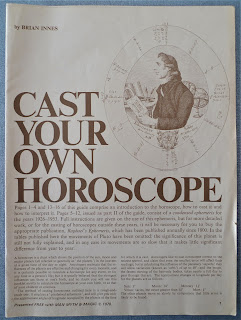 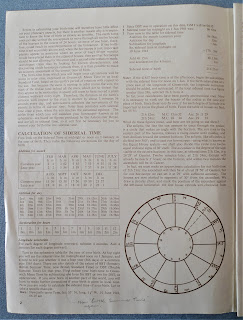 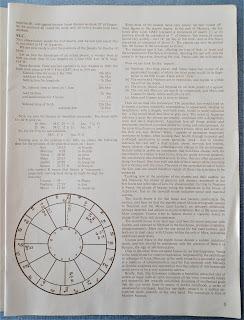 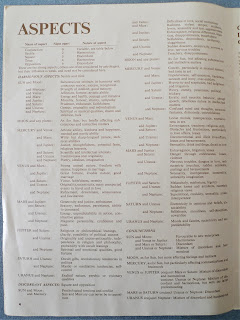 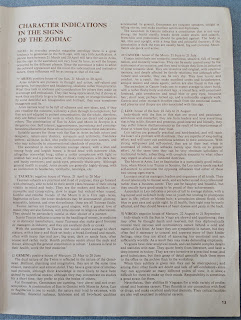 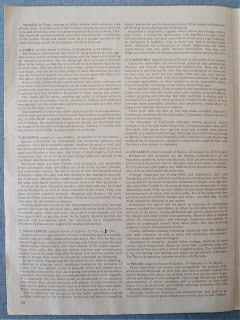 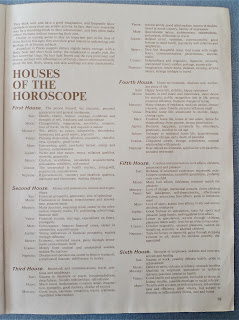 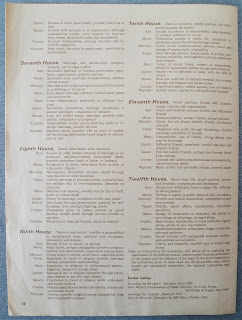 As you can see, it was a good a basic guide to casting one's horoscope, with notes on how to interpret the resulting chart. There were tables to consult - one for the Houses of the Zodiac, and concise Ephemeris Tables for each year from 1926 through to 1953. I'll show only the page with 1952 on it, my year of birth. 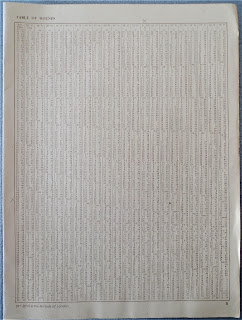 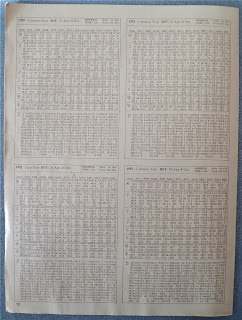 Wayne was rather disappointed. He was born in 1956, so he didn't have the planetary data to draw up his own horoscope. But of course I could. I did it as an academic exercise. Predictably - never being good as figuring, and this was before such things as electronic calculators - I made the odd error, but finally got it right, and could construct a chart showing where the sun, moon and planets were at my moment of birth.

There was a slight snag. Although it was definite that I'd been born mid-evening on Sunday 6th July 1952, Mum wasn't quite certain of the exact time. She thought it was 9.15pm BST, but she might be an hour or more out. So I had to assume a bit of leeway on the precise time of birth, with 9.15pm BST as only the most likely bet.

Here's my figuring, including corrections: 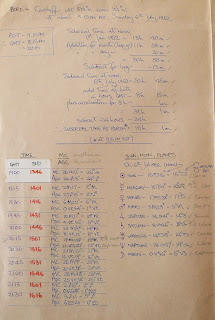 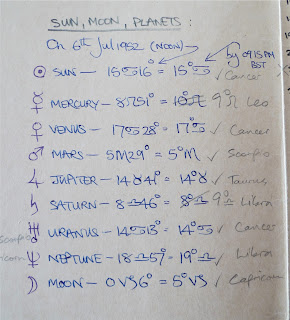 That's my handwriting in 1970, of course. It's developed rather further in the last fifty years!

This is the chart I produced. I invented a movable 'inner wheel' so that I could see how the position changed with different times of birth. 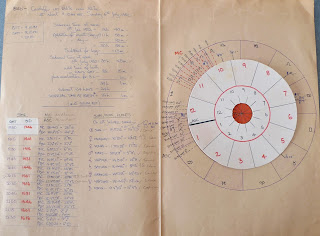 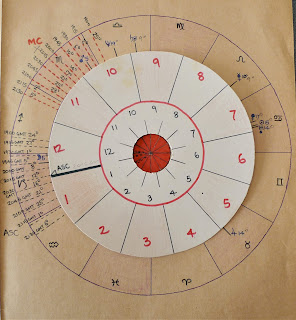 The wheel is pointing at 8.15pm GMT (the same as 9.15pm BST), and the various heavenly bodies are in their proper positions in the sky at that moment, as worked out from the Ephemeris Tables. Their positions are a matter of scientific fact. But the division of the sky into twelve sections named after signs of the Zodiac, and the twelve houses around that wheel, are no part of science as we know it.

Even so, the chart shows something quite remarkable. At the time of my birth, the Sun, Venus and Uranus were all in the same spot in the sky, 'in conjunction' in other words. Surely that's a rare event? An unusual event, anyway? That part of the sky bore the sign for Cancer, which is the same as the Zodiacal month for my date of birth. Really? Is that a coincidence? And with the Ascendant set on 8.15pm GMT, and therefore in Virgo, those three bodies all fall into the Seventh House, which (if you remember the musical Hair) is the House for marriage and partnerships.

Hmm. The Sun, Venus and Uranus are very close together. Should this get me excited?

Further along, three other bodies are close together, though not quite in conjunction. Saturn, Neptune and Mars. The latter two are both in the Tenth House, but if you shift my birth time forward by only half an hour, all three fall into the same Tenth House - the one for fame and celebrity. What fame and celebrity? Something amiss here...

I won't go into what's in sextile, trine, square and opposition. It can all be interpreted, but I have never gone into it.

I think the way the sun, moon and planets were arranged in the sky is highly interesting, but what can it possibly say about me? I'd be impressed if there were other children born nearby at the same time, possibly in the same Cardiff hospital, and we all had more-or-less the same characteristics, and we all turned out much the same in our lives. That common outcome would be some evidence of a common influence at work - the particular arrangement of the heavenly bodies at the moment of birth being one serious possibility. Though other factors might be a common social setting in South Wales in the early 1950s, a common upbringing and primary education, and generally belonging to the same generational cohort.

I never revisited my horoscope in later life, to refine it. I never believed in astrology, and more pressing matters kept me away from looking into it again, although in the early 1990s it was fun to see what Chinese astrology had to say about myself and the people in my life. But I've grown more and more sceptical as I've got older, more disillusioned anyway, and I've modified or shed the thinking instilled in me when young.

I wouldn't mock attempts to find out what human individuals are really like, and what their future might be. Any self-aware, intelligent being naturally wonders about their kind and whether the course of their life can be predicted in some way. That's not a laughing matter. But I don't personally believe that firm predictions are ever possible. It seems that the unexpected always happens instead.

Nor is prior knowledge of what's around the corner clearly a good thing. I definitely wouldn't want to know for certain what my future is going to be. Let it be a delightful surprise! Or if it's something awful, then I want to approach my doom in happy ignorance, and not live out my remaining time in gloomy anticipation, or dread, of the inevitable.

Incidentally, the standout events in my life - and I can think of a few! - weren't obvious to me from that 1970 horoscope. Perhaps the problem with these things is that they need an expert practitioner to work out what they mean, with the issue that no two experts will ever completely agree. An amateur might well be able to do the maths and draw up the chart - as I did - but interpretation is quite another thing. That said, I doubt whether a professional astrologist could, back in 1970, discern certain things about my personality, and could predict - with accuracy - what was to befall me in my fifties!
Posted by Lucy Melford at 23:52