How phone cameras can destroy pictures

There's no argument. The camera on a modern mobile phone is easy to use, versatile, and produces excellent results. And it maxes out on sheer convenience - because if you carry a phone, you have a great camera as well in the same device. For nearly all practical purposes, it's all you need.

But...and it's a big 'but' if you care about these things...those very nice results are the result of intense electronic processing and enhancement. The aim is to make lines sharp, and tonal patches distinct - whatever it takes to get rid of blur and fuzziness, and lift dullness. Nothing wrong with that in itself - most shots need some correction or tweaking to bring out their best - but all that combining of multiple shots, and sharpening the merged image, has bad results that show up at high magnifications.

I can show what I mean by comparing a shot taken this very morning with my little Leica (the 'real camera' of 2009 vintage, with a multi-element glass lens and only light assistance from electronics) - on the LEFT below - with an indentical shot taken with Tigerlily, my Samsung Galaxy S8+ phone (the 'phone camera' of 2017 vintage, relying on a tiny stack of plastic lenses and amazing electronics) - on the RIGHT below.

This was the shot, of the decrepit glasshouse at the bottom of my rear garden, taken with (in both cases) a modest x2.5 zoom from my lounge window. I got them up side-by-side on my laptop screen, then took a JPEG screenprint. You're actually looking at the screenprint, as uploaded to Blogger. 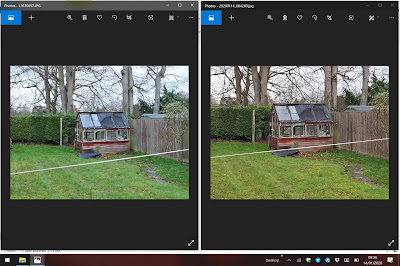 The phone (right) throws 12 megapixels at the shot, whereas the Leica (left) can manage only 10 megapixels. So the phone shot looks as if taken slightly closer, in this and the other shots.

I'd say the phone has captured the better picture. It's warmer in tone, although this is spurious: it was a cold morning with rain in the offing, and the cool Leica result (left) was the more truthful.

Let's magnify each picture to the same extent. 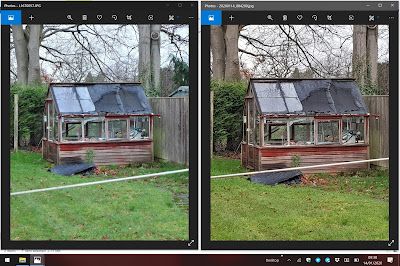 The shot turned out by the phone (right) still looks better. A lot of detail is now apparent, and it seems more distinct in the phone shot.

Let's now concentrate on the glasshouse doorway. More magnification; as before, to the same extent. 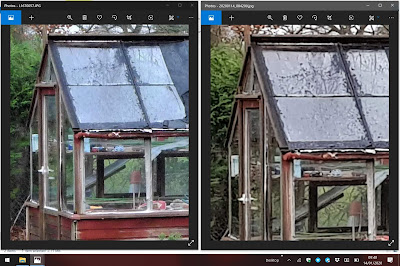 In the phone shot (right) all the straight lines in the glasshouse are very clear, but some subtlety has been sacrificed. It's beginning to look like a drawing, whereas the Leica's shot (left) has retained a little photographic fuzziness. I think many people would prefer the phone's clear, sharp rendition of the glasshouse, but it isn't a natural nor completely truthful rendition.

Now the other end of the glasshouse. 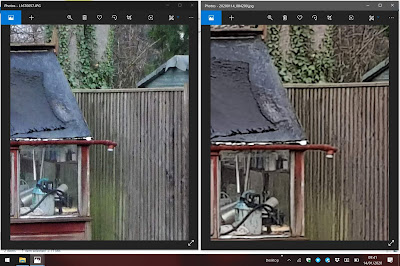 Again, the phone's result (right) looks crisp, with high contrast. But that plastic jar with the green top inside the glasshouse looks two-dimensional. And I don't like the rendition of the ivy on the beech trees in the background. Whereas the Leica's result, although less distinct, makes the jar look rounded, and the ivy on the beech tree behind looks like a real plant, not just a clump of green and black shapes.

Next, some fence and foliage shots. 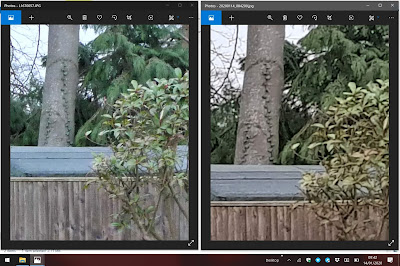 There's no question, the phone (right) makes everything look sharp and very distinct, but reduces it all to rather flat shapes. Whereas the Leica (left) - the 'real camera' - retains naturalness, even though the detail is not so clear to the eye. In the real world, objects at a distance are never easy to see in detail; the Leica is being faithful to reality. 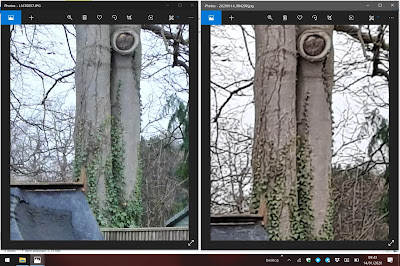 Surely the Leica's picture of the beech trees beyond the glasshouse is more truthful - and more useful, if you wanted to see the ivy as it really was. 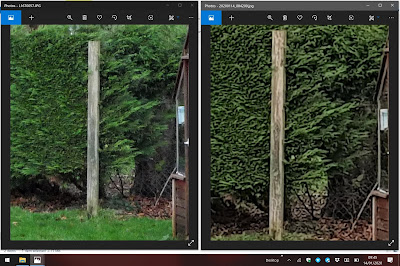 The phone's electronics have made a right royal mess of the feathery greenery of the rear hedge. It merely looks like a green and black pattern, and not a living thing at all. The Leica preserves reality, with a lightness of touch, even if it isn't such a crisp shot. 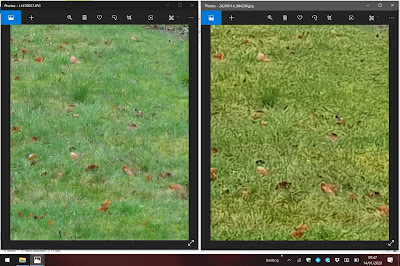 The same story with the grass of my rear lawn. The Leica (left) keeps the grass and the brown leaves recognisable and realistic. But it's all reduced to a green pattern in the phone's shot.

Here's a different comparison, from a few hours earlier, at night in my bedroom, by the shaded light at my bedside. 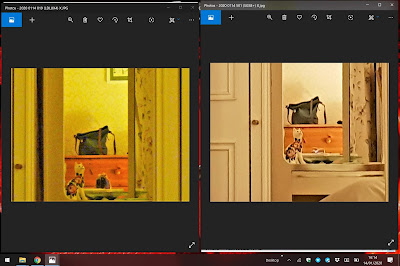 The Leica (left) has made everything look yellowish; the phone (right) has a much more correct white and cream rendition. Even so, the Leica has better captured the true colour of the things reflected in the mirror - the orange of the pine chest of drawers, the blue-green of my bag.

But let's concentrate on Rosie, my china cat. I've magnified each of the images above to the same extent, so that Rosie now fills the window. Leica left, phone right. 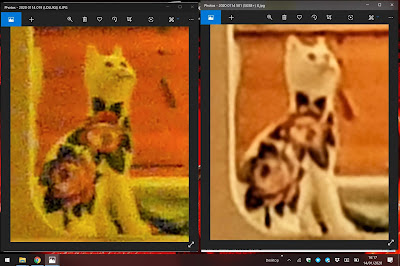 This is a tough low-light test with a medium-high ISO (both ISO 400), the widest aperture available (Leica f/2.8, phone f/1.7), and a slow shutter speed (Leica 1/8th second, phone 1/10th second). Neither picture of Rosie turns out well. The Leica's rendition (left) is the better: you can make out the pink and green of the 'cabbage rose' decoration painted on her, her head seems more distinct, and there is more detail in the woodwork behind. Although the phone (right) reveals Rosie as a white cat (correct), her 'cabbage-rose' decoration is now a dark red splodge, and her head is fuzzy. The woodwork behind is washed out and indistinct.

These shots are both poor, but I'm happier with the little Leica's result, and keenly disappointed with the phone's effort, which is unusually bad.

My conclusion? That Tigerlily - my very accomplished phone from 2017 - isn't clever enough to take good daylight pictures of natural objects at a distance. Nor do its night-time pictures stand up to scrutiny, if the subject (natural or otherwise) is too far away from the lens.

The phone is very good close up - very good at everything close up. Definitely the preferred choice for people, food and document shots, with brilliantly clear and attractive results expected. But the much-older Leica has the most natural rendition, whatever the distance.

Would a 2020 phone do as well as the Leica for distance work? It would certainly come closer than in this comparison. And I'm confident that a 2021 phone will be closer still. (I'm getting a new phone in 2021) But for now - for me - my little Leica has a clear edge where far-off subjects are concerned.

I hope you agree, and can see why I might itch to make more use of photographic equipment like the little Leica. Despite being nearly eleven years old, the Leica can still score in certain circumstances, or in certain ways. I ought to be exploiting that. I'm not at all disenchanted with my phone, but I can be realistic about which device is the better tool for a given subject.

But at the end of the day, which is the handier photographic device to carry around? Which can take pictures by voice control? Which is such an normal, everyday device that it goes unnoticed? Which always has access to the Internet?

It's horses for courses. Carry the Leica, and I'll have to sling two bags over my shoulder. But it just might be worth it.
Posted by Lucy Melford at 11:16