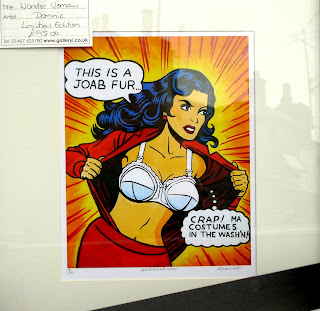 I spotted the above framed print in a backstreet shop window in Huntly, an inland Aberdeenshire town halfway between Aberdeen and Inverness. I was staying there for four nights, and in all had three strolls around the little town. The print is a version of a cartoon frame of Wonder Woman, who, like all of these superheroes and superheroines normally goes around with a distinctive costume concealed under her outer clothing, ready for any emergency in which her special powers can save the day. Although in the case of the Wonder Woman I remember from 1980s TV, her best cards were actually just being very pretty and very American, winking, and sporting a natty stars-and-stripes tiara.

Be that as it may, the transformational costume is everything. In this case, it's in the washing basket at home, and because of that she can't intervene to save the world. But she can still titillate the public with her chest exposure (what, no blouse?) and wild hair (so why does she need that tiara when in costume?) Note the amazing hips and waist, but above all the industrial-strength bra to hold in those boobs. Superheroines always, but always, have shapely figures to die for, and no-visible-panty-line costumes - indeed, wearing a bra or panties would entirely ruin the effect. They always look ultra-sexy. So she simply can't save the world - or rescue that kitten - clad only in her brutal thick white underwear. Of course not. She'll have to pass it up. (Why isn't Superman around to help? That's men for you - never there when needed)

Thus far, this isn't a particularly Scottish image. But the artist has played around with the word bubbles, substituting different words with a special spelling that suggests a very broad Scots accent. Ah! That must be the real element of humour here.

And this is as far as I can analyse the thing with confidence, having neither massive boobs nor a massive understanding of comedy. But I can make conjectures and guesses.

For one thing, if it's possible to sell a print like this in a Scottish town that's not on the main tourist trail - and therefore it's a print that has to appeal to locals - then clearly some Scots people can laugh at their own accent. I dare say it's a subtle thing though. Huntly is on the edge of the Highlands. The accent given by the artist to Wonder Woman might well be a Lowland accent, and I'm thinking especially that it might be a Glasgow accent, or at least something you'd hear in any big Lowland town. And maybe that's why a Highland Scots person would find it amusing. Whereas in Glasgow (although it might be Ayr, or Perth, or Motherwell  - how would I possibly know?) it could provoke deep offence. Just as most Londoners do not have a Cockney accent, and don't find it amusing to be parodied and laughed at as if they all have; or just as most Northern English persons do not speak as if they'd just stepped off the set of Coronation Street, and will take just and frightful umbrage if thus mocked. Or the reaction you might get in Devon or Cornwall if you say 'Oo-arr, M'dear' too many times in the wrong place. Expect to be decked if a man, soaked in beer if a woman.

The artist also makes Wonder Woman swear freely. Well, perhaps that's spot on. I dare say I'd say 'Crap!' too, if I suddenly realised that my save-the-planet costume was in the wash. Or I might say even worse.

Let's move on to another print in that Huntly shop window. 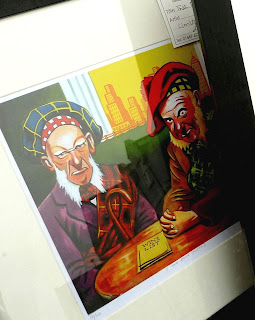 Oh dear! Two very grim elderly Scotsmen. They are sitting in a city bar (note the skyscrapers in the background). Despite the gay colours of their traditional garb, their hearts are obviously bleak and stern, and they are all set to complain at length. I think the print was titled Twa Dour Scots. One has a pulpit face that would frighten any congregation into repentance. The other an apoplectic, implacable stare, the very picture of contention and dissatisfaction. These are insulted men with a bitter grievance they intend to make known to the staff of the establishment. There will be no escape. On the table before them is a wine list.

It's clearly a funny picture. It's a parody of the narrow-minded older Scot, prickly and uncomfortable for being out of his natural element. And in a city bar, and not the kirk. The facial expressions are very well drawn, and perfectly convey their dreadful displeasure.

I'm not sure why they are so put out, though. Do they simply hate everything to do with the big city? Have they taken the Pledge, and are teetotal, and think a wine bar is a sinful thing and a work of the Devil?

The clue must be the wine list in front of them. It's only a guess of mine, but I think they are connoisseur whisky drinkers, and there is not a single whisky on that list. So they are aggrieved by the prospect of ruining their palates on an inferior fluid. I must say, I would quail at the prospect of dealing with them, even if I owned the place and could throw them out. What did I say just now? That they were 'very grim'? I think that laughing at grimness must be part of the Scottish sense of humour. Just as swearing at a costume mess-up is.

If you are Scottish, please forgive me. I'm sure I have entirely missed something important here, and I'd appreciate knowing what is really the funny point in these two pictures. I hope you will at least acknowledge my bold spirit in having a go at trying to understand.
Posted by Lucy Melford at 11:30