Alexander Dubček was the man in charge of Czechoslovakia in the later 1960s - effectively the Czech Communist Party's main man - who, while remaining true to basic Communist principles, and carefully reluctant to disturb the integrity of the Warsaw Pact - attempted nevertheless to introduce freedoms inside his country, such as a free press. He was the government leader supporting and cautiously encouraging the 1968 Prague Spring, a temporary blossoming of individuality and free expression, softening the harshest elements of the hitherto rigid Communist rule in his country.

Later in 1968, this move towards freedom was crushed, and the rest of the world saw TV reports of Soviet Russian tanks in the streets of Prague. Almost all the other Warsaw Pact countries were there with the Russians. It was deemed vital to show a united front against any undermining of Communism in Eastern Europe. They all feared that a freer Czechoslovakia would turn to the West, something that could not be permitted. Dubček and his allies were arrested and taken to Russia. He was soon allowed to return, but the country's drift away from hard-line Communism was halted, and everything had to be 'normalised' again.

Dubček was reinstated in high office but was now carefully watched, and soon he was expelled from the Communist Party, signalling the end of his political career under the old regime. He wasn't 'bumped off'. He was given a role in the country's diplomatic service, and then a post in a government department. He was able to live a normal, comfortable life - but out of the public eye.

Roll forward to 1989. European Communism faltered, and then failed. At last, real freedom for Czechoslovakia. Dubček was honoured for his past efforts, and became a senior symbolic figure in the new Czech Parliament.

In hindsight, it's easy to see that he was twenty years too early. Had the Prague Spring occurred in 1988, it would have succeeded. But in 1968 Russia and its allies were still able to invade and control. I was by then a keen follower of events, and to me the Soviet intervention not only seemed inevitable, but it came with all the expected assertiveness. And yet Prague's spirit was not quelled. It was a tragedy to see the invasion unfold on TV, and the tanks certainly looked brutal in those city streets, but they were facing not an army they could get to grips with, but nimble individuals who had tasted freedom. Brave people dodged in and out of the tanks, some getting injured, but for a while putting up an inspiring display of low-level resistance. The crack-down that followed was saddening; but somehow you knew that tanks would not always win, and that it was only a matter of time before Czechoslovakia would be truly free.

For a short while - for a year or so, mostly in 1968 - Dubček had looked like a hero, risking his neck so that the Prague Spring could develop and transform his country. And it was at that time that somebody painted LONG LIVE DUBCEK on a wall next to a road junction on the outskirts of Southampton. As it happens, it wasn't very far from where Mum and Dad (and of course myself) lived in Swaythling, a suburb on the north edge of the city. I didn't see the painted slogan at first, but once I was driving (on a full licence from 1973, but as a learner before then) I would pass it frequently. You could hardly miss it.

The funny thing was that nobody defaced it, or painted it out, or in any way tried to clean the wall. It was as if everyone respected this painted slogan, and by general agreement wanted it to persist as a monument to a brave man. Even though he wasn't really a revolutionary in any ordinary sense, and never abandoned his belief in Communism for something more in tune with modern times. Be that as it may, the words on that wall were still clear and obvious to see ten years later in 1978, although the name of Alexander Dubček must have by then faded from memory somewhat. The paint was fading a bit, too, but not much.

I moved to London in 1978, and rarely saw LONG LIVE DUBCEK thereafter. But it didn't go away. The message remained on that wall, eventually getting covered with plant growth - which helped to preserve it.

Something jogged my memory of it this morning. I was planning a long-distance outing for the day, and was considering another nostalgic trip to Southampton - specifically Swaythling this time, which I hadn't walked around for some years. That's when I thought of the Dubček slogan again. Was it still there?

It wasn't really the day to go very far - it was dull and damp, and it would start getting dark too soon - but, curiosity stirred, I did try to find pictures of LONG LIVE DUBCEK on Google. I found only a couple, snapped in 2018, after the wall had been cleared of foliage and ivy. 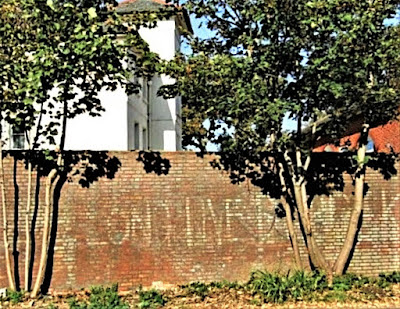 Well, well! There it was, after fifty years. Faint but legible. Could I find other shots? Earlier ones, perhaps?

What about Google Maps, and Google Street View? Could I capture a shot from there? I could. In fact, I discovered that it was possible to view all the pictures taken at various dates by the roof-mounted Google camera as it passed by. (Did you know that you could do that?)

So here it is: LONG LIVE DUBCEK in all its latter-day glory. First, August 2009, when still concealed under dense greenery: 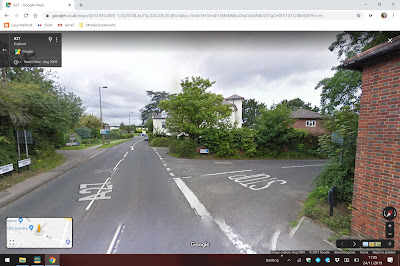 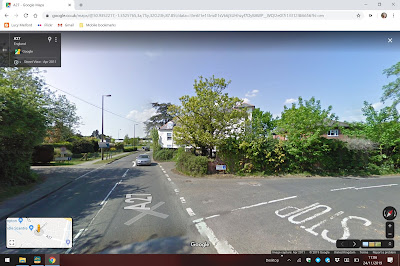 June 2012. Some letters are visible, if you peer closely: 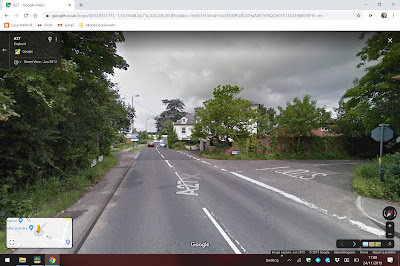 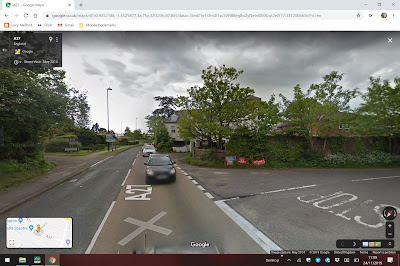 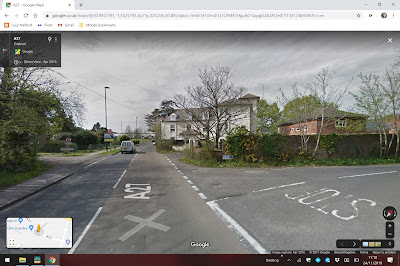 May 2018. The greenery - apart from the trees - has been cleared away, revealing the slogan: 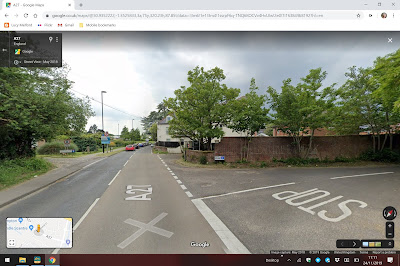 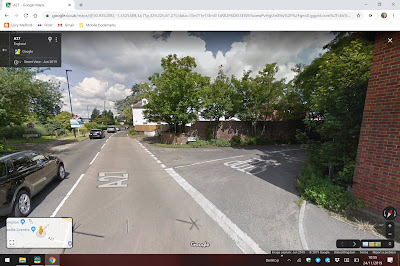 I should perhaps mention that the road joining the main A27 road here used to called Allington Lane. But after the southern end of Allington Lane was diverted by the building of the M27 (this part of the motorway was opened in 1983) the old southern section of Allington Lane (now a dead end) was renamed Romill Close. (Admit it: secretly you wanted to know this)

I've included all these shots of the same spot to illustrate that you can take screenprints on your laptop of any place visited by the Google Street View camera, for any of the dates available. In this case, quite a number. (Perhaps thankfully, I haven't shown them all) I surmise that the Google camera is active on most roads in and around every city, on a regular updating schedule. And that it must be possible to take screenprints of any particular locality for a variety of dates, provided the camera has passed by more than once. Useful, if you want to see what used to be there.

Getting back to Mr Dubček, I wonder what he would have to say about (a) the unknown admirer who painted LONG LIVE DUBCEK fifty years ago; and (b) about that slogan's survival.

For my part, I'm glad that a bit of 'my' Southampton - the Southampton I knew from 1963 to 1978 - has survived. I'm definitely going to give it a personal inspection when I do finally drive over to Southampton again. And I hope that some local historian has made proper notes on it. If he or she is reading, perhaps they can tell me more about who painted it, and whether the city council value graffiti like this. It deserves a Blue Plaque.

Extra information
Wikipedia has an article on the man. See: https://en.wikipedia.org/wiki/Alexander_Dub%C4%8Dek.

As to the graffiti on that Southampton wall, in 2000 the Southern Evening Echo newspaper said it had found a man who claimed to have painted it as a teenager while drunk, praising a musician friend whose nickname was 'Dubcek'. He added that he had never heard of the actual Czech politician. You can read it here: https://www.dailyecho.co.uk/news/5629080.let-me-reveal-slogans-story/. Well, the story might be true, but in all the circumstances I don't give it much credence. The graffiti definitely appeared as the Prague Spring was being put down, exactly when Dubček was in danger of his life for his liberal actions, and it was absolutely in tune with the general outrage felt at the time. Everyone would have recognised it as a contemporary political slogan, and not merely a reference to an obscure local man, daubed by a half-cut mate who just happened to have a brush and pot of paint handy. My apologies to that drunken friend of course, if his mundane explanation is the truth - and relief that the real Mr Dubček never knew.

Finale
Finally, it's fair to ask me why - if I nowadays take so many photographs of so many diverse subjects, particularly of places - and you have only to look at my Flickr site to confirm that - why haven't I got a series of pictures in my own archive, showing LONG LIVE DUBCEK when it was newly-painted? After all, I have said elsewhere in these posts that even though I couldn't afford to buy much photo film while still at school in the 1960s, that changed once I was working from 1970 - and especially after acquiring a 'proper' camera in 1973. Surely, I'd be avid to shoot everything worth a picture?

Well, the notion of photographing my local area, and creating a kind of historical record, never occurred to me at the time. I wanted to take pictures of people (though not myself) and favourite holiday scenes in places I loved, like Cornwall. Not humdrum Southampton. Southampton wasn't the most photogenic of cities back then, and in my view still isn't. I do like to go there now, and blitz the place, but nostalgia drives that. I had none then. I just wanted to leave school, start earning, and when ready for it, get my own place locally or up in London. I wasn't emotionally attached to Southampton, and shooting local graffiti, whatever its significance, just wasn't my thing. I regret it now, of course.
Posted by Lucy Melford at 23:22