Despite the title of this post, I was too young for the actual Rock 'n Roll era, being born in 1952. I was still a very small child in its hey-day. My musical teeth were cut not on Rock 'n Roll but the Mersey Beat.

As I grew up, I initially regarded the music of the 1950s as rather old-fashioned, and not my scene at all, even the lively music associated with typical Rock 'n Roll dance routines. The dancing was especially not my thing - I was too shy and awkward to allow myself to take any interest in such an exuberant, skillful and clearly very intimate physical activity. But in the decades since, my attitude has moved on a bit. I can now see the joy to be had from it all, if you like the Rock 'n Roll style, the sound and the rhythm, and have the confidence to dance vivaciously to it. With a dance partner, naturally.

Well, I don't do dance partners. My instinct is to be a wallflower, and hide in the shadows in case I'm hauled up onto the floor. That said, I think that, given sufficient motivation, I could probably learn the basic steps, and I'm not totally terrified. It might indeed be a thrilling experience, and a bit of me would enjoy being asked.

But I assure you, I am not presently so motivated. In fact I do not dance at all. I generally plead a truthful medical reason: that my knee ligaments, damaged in the 1990s by badminton, won't stand up to very much. But I dare say I could manage a careful, very simple, and not-too-frantic dance routine. It's just that I can't see myself wanting to try.

The matter will soon be put to the test. Next Saturday, as another bit of her spread-out 60th birthday celebrations, Jackie next door is having a Rock 'n Roll Party at a local pub, in their function room. It isn't compulsory, but she wants those who attend - a large number, I'm guessing, and it will include myself - to dress the part, and be prepared to dig the music, and whirl around a bit on the floor. Well, I could certainly do my best to dig the music, even though (as mentioned above) it might take divine intervention to get me on my feet. I was however very happy to dress the part. I didn't mind one bit slipping into a stylish fifties dress. And, thanks to Slimming World, it was a feat I could probably manage with reasonable ease.

First, though, I'd need to buy an outfit at a shop that sold fifties clothing. No problem: Collectif in the North Laine area of Brighton was the obvious place to go. I went there yesterday afternoon. Here's me, outside. 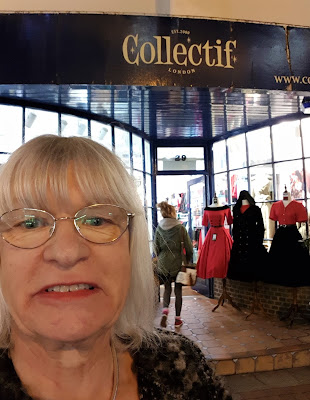 Inside, it was Fifties Heaven. All the clothing was new, but authentically-styled. And it was the last day of their current sale, with 30% off. I looked at the latest stuff, not in the sale. It was lovely, and some of it would be fabulous to wear, but a typical blouse-and-skirt combo would probably set me back almost £100. And that was excluding the petticoat I'd probably need to puff out the skirt in fifties fashion. All too much to pay for what might well be a one-off event.

But there were sale rails groaning with likely garments. I chose three dresses to try on, and went downstairs to the fitting rooms.

This was the most stylish, a black and mint-green number. 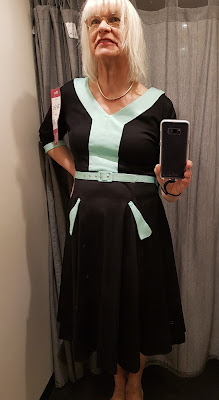 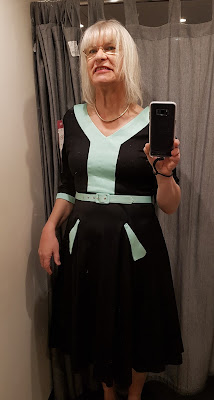 I really liked this one. It would have cost £52 in the sale. Plus £21 more for a petticoat they were selling. But there were a couple of problems with it. The material was heavy: I would quickly feel very hot in it, especially as it fitted very snugly around the waist. And to keep the design 'clean', it had a long hidden zip running up the back that I couldn't reach. I had to ask one of the shop assistants to zip me up. I couldn't see how I would be able to get into it - or out of it - on my own. A fatal flaw. So reluctantly, I had to pass it over.

Next up, an all-green dress from their bargain rail. I think this one was marked down to only £20. 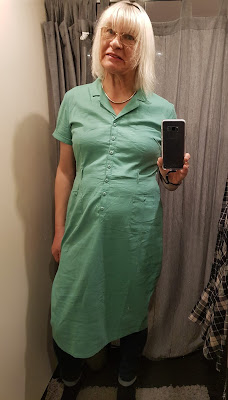 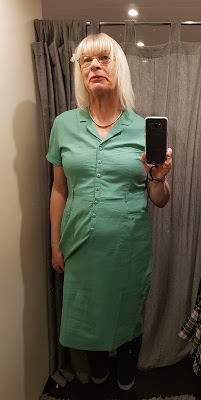 Oh dear...it made me look like a paramedic, or a nurse. It would be great as a uniform - trust me, I'm a doctor, and all that. It also lacked pizzazz. A lady waiting close by entirely agreed with me. I took it off with no regrets.

But I was much happier with my last choice. This was a check dress that wasn't quite the snug fit of the first I'd tried on. It was in fact pretty comfortable. My waist was small enough to fit the classic fifties design. I arranged the petticoat under it, and gave it serious contemplation. This and the petticoat would set me back £80. Not too much. 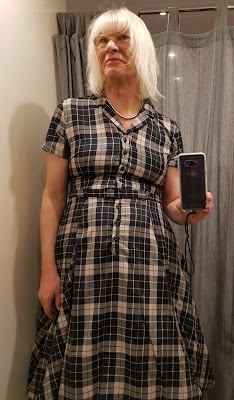 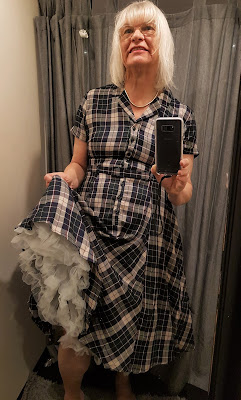 It wasn't in some eye-catching colour, and the check pattern made it a bit subdued for a Rock 'n Roll Party. But on the other hand, I didn't wish to be the belle of the ball, nor out-do Jackie in the dress department, and this was a dress that could be worn on other kinds of occasion. It might have a long future in my wardrobe. I needed a second opinion, and got it from the ladies waiting outside. Their feedback was very positive. I got the young shop assistant to hold my phone and shoot me whirling around in the dress. 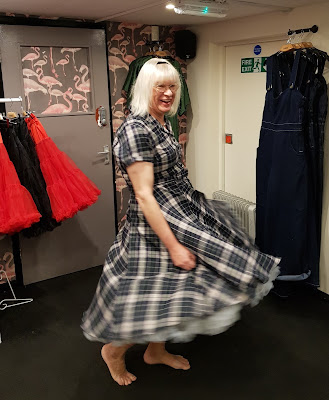 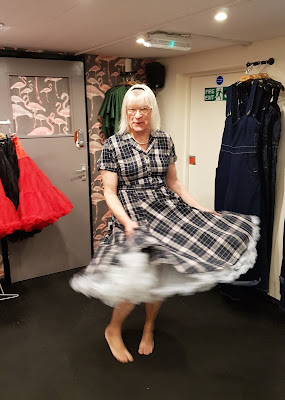 What to do? This dress fitted, let me breathe, and swirled well. It wouldn't make me look like a superannuated student at a high school prom. Nor a flashy dancer from Grease. It wasn't all blue or red satin. The colours were muted - and possibly unexciting - but it definitely had that fifties look. I decided to buy.

Back home, I thought wistfully of the first dress, the black and mint-green one. But that zip up the back made it a no-no for me. So I put it out of my mind. I tried the check dress on again. Yes, it was a good fit. I'd be happy in it. More than happy.

Next morning, I examined the dress in daylight. It would need a little ironing. No problem. The check pattern was chiefly dark green and dark blue - Sherwood Green and Navy Blue, to be precise, with the Navy Blue dominant. It looked vaguely Scottish, and I wondered if it might be based on an actual tartan. 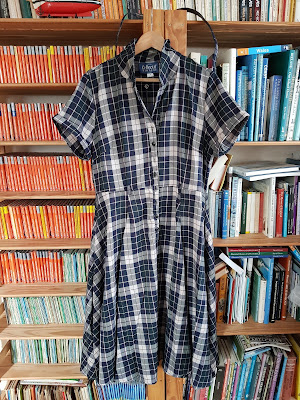 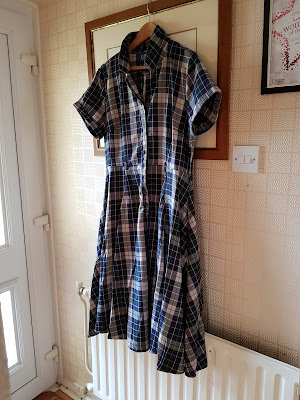 It probably wasn't a straight copy of a tartan pattern, because I think those must all be protected designs. But I might be wrong. Who knows, this might identify me as a member of the Clan MacHaggis, with whom the Clan MacNeep have had a centuries-long blood feud. It might be a death sentence to wear this dress. I'll just have to take the risk.

On the night I could embellish it with a scarf. I had a green one that would do. 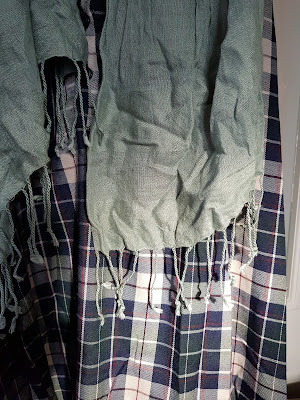 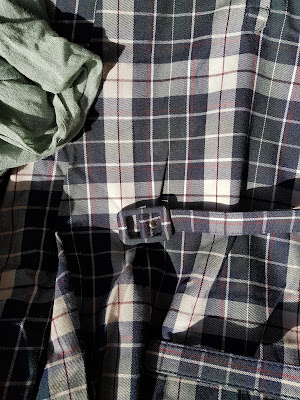 The really amazing embellishment was of course the petticoat. I was glad I hadn't stinted on the cost of adding it. 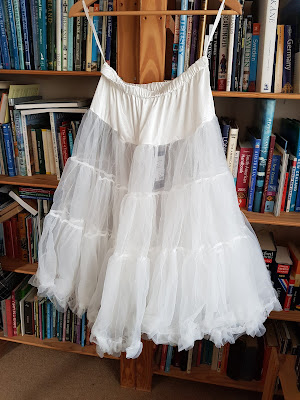 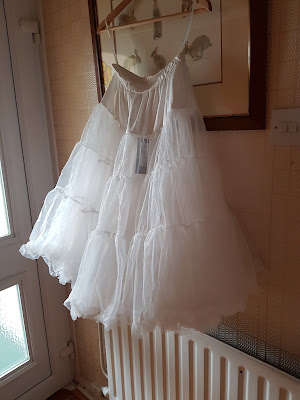 Jackie will be impressed! I'm looking forward to next Saturday very much now.
Posted by Lucy Melford at 19:24